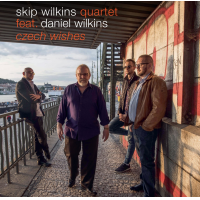 Although he's based in Eastern Pennsylvania, where he teaches at Lafayette College, pianist Skip Wilkins spends as much time as he can in the Czech Republic, the source of inspiration for his last two releases. Czech Dreams (New Port Line, 2013) and Czech Wishes, his current project, are not so much about crafting an Eastern European-tinged music, as Wilkins' songwriting stays comfortably within the world of mainstream jazz. He does have an impressive trio of Czech musicians with him on this release, and it is clear that the people and culture of the Czech Republic have made quite an impression on Wilkins, who was fortunate to get a sabbatical from his teaching duties to compose the nine charts that make up this strong outing.

Wilkins has assembled a fine quartet with trumpeter-flugelhornist Miroslav Hloucal, bassist Tomáš Baroš and drummer Marek Urbánek. As an added bonus, his son Daniel, a promising tenor saxophonist, is also part of the mix; previously he teamed up with his dad on Father and Son (SteepleChase, 2012). It is obvious from the medium-tempo, hard bop-themed opener, "Teacher," that Daniel's rich tenor is an effective counterpart to Hloucal's flugelhorn in comprising the band's two-horn threat. Skip's scampering solo provides a glimpse of his convincing prowess on the keys before turning things over to Hloucal, no slouch himself when it comes to digging-in on an energized solo. Daniel gets his own showcase on another mid-tempo groover, "Munchkins of Karlovy Vary," where he displays patience and rhythmic command on a feisty solo which brings to mind a young Joe Henderson.

A couple of poignant ballads balance the program; "On the Train" brings out the duskier side of Daniel's tenor, while the wistful "Don't Forget Me" is especially affecting, performed as a duet by father and son in tribute to Skip's parents. But it's the up-tempo burners that allow the group to shine most brightly, as on the invigorating "The Box-Checkers," where the rhythm tandem of Baroš and Urbánek finds the pocket and stays there, empowering fervid solos from Hloucal, and Wilkins father and son. Urbánek takes a few bars at the end of the track for his own rhythmic fusillade, and makes the most of it. The album's closer, "Wise One," is a punchy, hard-swinging piece with stellar comping from Skip Wilkins and the rhythm section underneath Hloucal's tenacious trumpet, before Wilkins stretches out on his last solo of the album. It's a fine finish to a well-conceived album, with heartfelt devotion to friends and family, far and wide, who have shaped Wilkins so profoundly.

Teacher; Munchkins of Karlovy Vary; On the Train; The Box-Checkers; Czech Wishes; Don’t Forget Me; In Search of Greener Grass; Reptiles; Wise One.