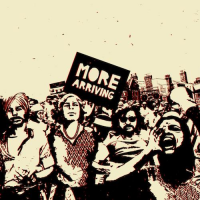 In dusty old legends, the tabla came into being when a thirteenth century Sufi disciple sawed a pakhawaj (two-headed drum) in half. Sarathy Korwar has delved deeper into history than that by recording the music of the Sidis, descendants of African tribes who came to India in the seventh century. The results of this bore fruit on his album Day To Day (Ninja Tune, 2016) with ambient sonics flitting among the field work. A devout student of the tabla, Korwar later released the live effort My East Is Your West (Gearbox, 2018) whilst finalising the meticulous More Arriving.

Phrases both oral and musical make an impact, as Korwar deploys the peppiness of rap alongside the digital folklore of his modern and classical roots. Korwar adapts his own interaction where needed, using hand shapes and strokes to offer a range of resonant and subdued sounds. Despite the urban dramas that unfold here the tabla lends a natural presence, like tappings on a hollow log, or the knockings of forest creatures.

If these clattering spirituals show one thing, it is that devotion can be expressed in many ways. The essence of each track is non-violent, but their delivery is fully loaded. There's little relaxing or late-night about More Arriving. It comes from the seething south London jazz scene of ravers, groovers and movers, also known to Sons of Kemet, Nubya Garcia and Tenderlonious among others.

Opening cut "Mumbay" bursts from the traps with a street procession of slinky sax and drums. Bombay-born rapper MC Mawali enters the fray making rapid puns on the colonial term Bombay, versus the Indian nationalist name Mumbai: "Mumbai ya Bombay/Mala kai farak nahi" ("Mumbai or Bombay/Doesn't make a difference to me"), he hisses, setting the tone for an album of skirmishes. Korwar's percussion is in overdrive here, conjuring the hustle and bustle of every sidewalk he has known.

"Jallaad" is a brief and pungent snapshot of street life, then "Coolie" brings a patois rap about Indian slave labourers who took the cannabis seed to Jamaica. Jagged brass and a quick dance beat celebrate the heroic lives of everyday people, whilst the words cock a sneer at those in power: "Cocaine run by the CIA/Opium smuggling run the same way/East India Company they came up in this way."

London playwright Zia Ahmed stars on "Bol" and intones a solemn poetry slam over warming harmonium. Like the murmurings of a troubled sleeper, his thoughts echo against an ecstatic chorus and percussed thrashings in the finale. Ahmed appears again for the sardonic "Mango," another piece that revels in sharp word play: "Man go into bar/ And bar man go, Why the long mango?" Further in, the commentary shifts tone to a reggae-like directness of social concerns— there's even a soccer manager included—as Korwar finds vocal inflections in his tabla's pitch and patter.

Verbals are mostly banished for "City Of Words," an instrumental where Chris Williams's simple sax melodies infer something exquisite, whilst Indian classical singer Mirande calls out sensually. She returns on "Good Ol' Vilayati," another wry title with roots in Hindi slang and colonial posturing. Mirande's dazzling improv might be scat, might be ancient text, but is energising if near exhausting to reckon with. Prominent writer Deepak Unnikrishnan guests on closing cut "Pravasis" to ponder the immigrant's lot over haunted strumming, to which Korwar adds an ominous touch.

If the album reaches a stark conclusion it also nags us to consider our basic humanity. Despite a contentious subtext, the whole breadth of existence is deemed worth fighting for on More Arriving. Korwar's use of the imagination on reality is where his real genius lies.