By Dan McClenaghan
April 30, 2007
Sign in to view read count 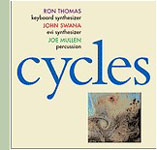 Many jazz pianists have a grounding in the classical side of music. Ron Thomas's anchoring may be deeper there than most. His back-to-back piano trio outings, Doloroso (Art of Life Records, 2006) and Music in Three Parts (Art of Life Records, 2006), explored some very alluring, loose sound shapes shaded by his classical side in a quite accessible way—gorgeous recordings, both.

A trip to the pianist/composer's website and an exploration of his eloquent and extensive ramblings is quite a strange trip. Thomas reveals that when he saw the romantic comedy The Seven Year Itch in 1957, he was "mysteriously prompted" by the soundtrack's inclusion of Rachmananoff's "Second Piano Concerto" to become a musician. This was a movie that starred Marilyn Monroe. I remember the movie well; but Rachmananoff—sadly, in retrospect—didn't make an impression on me; which may explain, in part, why Ron Thomas is making great sounds and most of the rest of us aren't.

With Cycles, though, a first impression was: "What the hell is this?" After experiencing the organic beauty of the two 2006 piano trio sets, Thomas makes a departure, with his keyboard synthesizer in place of the piano, teaming with trumpeter John Swana, who plays an electric valve instrument here, and Joe Mullins on percussion.

This is strange stuff: electric washes and trilling neon noises, cries that sound like whale songs mixed with soundscapes and indecipherable messages from outer space. Atmospheric to the max, this feels like a science fiction movie soundtrack a good deal of the time; speaking of which, one of his compositions here is "Electric Sheep (Dream of the Android)," borrowed from the Philip K. Dick novel Do Androids Dream of Electric Sheep that became the movie Blade Runner.

Mullin's drumming keeps thing from soaring out of the galaxy, nailing down the glowing and diaphanous electricity. Or at least trying to. Without him this might have been an unlistenable experience; with him things get tied—albeit loosely—together. With him, amorphous atmospheres gain shape and become weirdly compelling.

CD1: Cavatina; Temple of Artemis; Is It Ulysses?; Ancient Boundaries; Electric Sheep (Dream of the Android); Desert Music for the Inner Ear. CD2: Hannibal; Miles Beyond; Hour of the Wolf; Damascus; Apollo's Taxi.