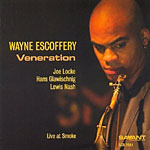 Live at the Village Vanguard: These magical words signified a musician had made it in the world of jazz. For the current generation of musicians, Live at Smoke may now take its place.

Tenor saxophonist Wayne Escoffery clearly has arrived, as evidenced on Veneration: Live at Smoke. Escoffery, who performs regularly with Tom Harrell, the Mingus Big Band and Ben Riley's Monk Legacy Septet, has honed his chops and is in clear command of his instrument. This outing provides an excellent case that his name deserves mention in any discussion of upper echelon tenor players.

The quartet outing is dedicated to one of Escoffery's teachers, the late Jackie McLean, and it is fitting that one of the highlights is "Melody for Melonae, from McLean's seminal Let Freedom Ring (Blue Note, 1962). Here the tune features haunting bow work by bassist Hans Glawischnig and wonderful interplay between Escoffery and Joe Locke on vibes, including some brilliant scatting behind Locke during his runs.

Escoffery shows his comfort with a near ballad on the elegiac "Tell Me Why, and displays his developing identity on soprano. The album's statement moment, and an early contender for song of the year, comes on Billy Strayhorn's "Isfahan, which features Escoffery in a beautiful duet with Glawischnig.

With Veneration: Live at Smoke, Escoffery has made his mark.

A passion for jazz, films, and writing somehow evolved into Edward reviewing music for AAJ....