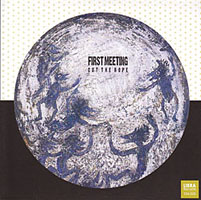 Trumpeter Natsuki Tamura creates a vast expanse of sound on Cut the Rope, the first album recorded with his band First Meeting. Nothing is predictable on this wholly improvised album that ranges from aspects of a vision of being marooned on a desolate soundscape to the musicians ultimately finding their way into a melodic river of sound, after at first coming perilously close to losing all sense of direction. But Tamura is an expert guide: he wields his horn like a sonic standard bearer, guiding his improvising crew from opening figure to group improvisation and back to a resolution, despite traversing some of the most varied paths in song.

Tamura bleats, howls and snorts his way through dune-like structures, disturbed only by the drone of guitarist Kelly Churko's incessant scratching and wild ramblings via acoustic feedback and pedals of every kind. In the absence of a bassist to anchor the expedition, drummer Tatsuhisa Yamamoto devises various signature rattling figures on snare drum and tom-toms, allowing only so much chaos to enter the proceedings as to create just a ripple—not enough to detract completely from the organized chaos of the track. Tamura's wife, pianist Satoko Fujii, completes the quartet, providing oblique angles to each piece.

On the title track, Fujii uses a prepared form of the instrument, manipulating strings and pedals to create a shimmering resonance that allows the track to swing tremulously, as the rest of the musicians soar unfettered to improvise and fantasize. On "Headwaters" Fujii plays a fanciful folksy figure almost throughout, anchoring the piece in a bleak, yet peaceful place, so the musicians are forever guided by the myth of tradition. Churko sets fire to "Flashback" with hot slashes, while Tamura seemingly fans the flames of the proceeding elements. Fujii, once again, appears to play an anchoring role harmonically, as Yamamoto's rhythmic invention calls for him to join the improvisation as well. "Kaleidoscope" possesses a swirling structure, with Churko drawing from folk melodies, as Tamura and Fujii reference everything from the diatonic rambling of warrior bugling, and the suggested serialism of Schoenberg, to the shattering figures reminiscent of Stockhausen and Boulez. Tamura brings this exciting set to a close with "Sublimation," but not before stirring the still waters enough to create a generous ripple, into which all the other musicians dive ostensibly on cue.

The is a short, eventful set expertly construed by Tamura, where brilliant sound collages are erected with architectural expertise and a subtle elegance. Fujii, Yamamoto and Churko contribute more than simply color; their ideas are integral to the collisions that ensue, when four improvising musicians meet with heads full of suggestions for a sonic journey full of surprises.