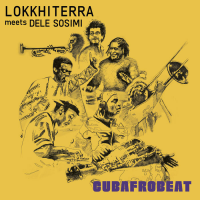 A younger version of London's Grand Union Orchestra, founded by world-jazz pioneer Tony Haynes in 1982, Lokkhi Terra was put together by keyboard player Kishon Khan in 2005. Both ensembles have made a specialism of jazz / South Asian fusion, with Lokkhi Terra also giving as much attention to music from Cuba, where Bangladeshi-born, London-based Khan lived for a while in the early 2000s.

Cubafrobeat, as the title foretells, is a blend of Cuban dance music and Nigerian / Yoruban Afrobeat—a fusion rendered seamless by the synergies existing between Afro-Cuban and Yoruban music, language and mythology. The album is Lokkhi Terra's third and partners the band with the keyboard player and vocalist Dele Sosimi .

A young-going-on-child-prodigy member of Fela Kuti's Egypt 80, Sosimi went on to become musical director of Femi Kuti's Positive Force, before relocating to London and setting up Dele Sosimi's Afrobeat Orchestra, the finest Afrobeat band outside Nigeria, bar none, now with a string of consistently engaging albums under its belt. Cubafrobeat features Sosimi as lead vocalist on all four tracks, and on Fender Rhodes on two of them. His singing plays a prominent role in the Afrobeat Orchestra, but, such is the whirlwind impact of the band in full instrumental flight, that Sosimi is often thought of first and foremost for his keyboard and arranging talents. That may change by the time 2018 is over. Cubafrobeat is the third album in as many months to feature Sosimi as guest vocalist, spotlighting the gravitas, air of mystery, intimacy and ferocity his voice can bring to an occasion.

The first of these albums was the genre-bending spiritual-jazz band Emanative's Earth (Jazzman). One of the stand-out tracks, "Ìyáàmi," features Sosimi making obeisance to the titular Mother Goddesses of the Yoruba spirit worlds. His raw and intense invocations carry the track for nine mesmerising minutes. Otherwordly is not the half of it. Next up was dub / reggae / jazz band Soothsayers' Tradition (Wah Wah 45s), which featured Sosimi as lead vocalist on the compelling "Sleepwalking (Black Man's Cry)." Earth and Tradition are both outstanding albums and have previously been reviewed here.

Cubafrobeat is a total stonking blinder, too. It is an effectively nuanced affair, opening with the fiery "Afro Sambroso" and closing with the relatively reflective "Rumbafro." Sosimi's vocals light up the music, as do the several solos from trumpeters Graeme Flowers and Yelfris Valdes Espinosa and trombonist Justin Thurgur (a member of both Lokkhi Terra and the Afrobeat Orchestra). Sosimi and Kishon Khan's intertwining Fender Rhodes solos on "Cubafro" are also a delight, as is the drum and percussion section throughout.

The sound of summer, for sure, Cubafrobeat has enough depth and variety to make it something for all seasons.