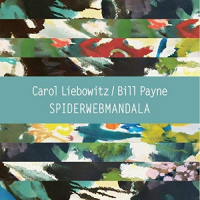 Spiderwebmandala is an album that miraculously manages to simultaneously capitalize on the concepts of connectivity and detachment, toying with a form of polarity tied to the very notion of togetherness and using it as the ultimate artistic tool.

Having worked together since 2010, pianist Carol Liebowitz and clarinetist Bill Payne are more than comfortable with each other. That comfort, however, never gets in the way of their art. As demonstrated throughout this collection of freely improvised works recorded live at Albuquerque's Outpost Performance Space in 2016, Liebowitz and Payne owe no allegiance to anything or anyone. Their opening missive—"Deep Sky"—makes that abundantly clear. Angular queries, headlong dives, searching glances, and dalliances with discord all inform that bewitching piece and much of what follows it.

This duo's two-night engagement in New Mexico was organized and curated by poet Mark Weber, so it's only fitting that he appear in the mix. On "Spiderweb Mandala Flower Explosion Poem: Drishti," Weber's words elicit sonic reflections and refractions from Liebowitz and Payne, as sound and light bend toward the will of poet and poem. Further on, during "Mixtures Of Aroma In The Smoke," piano and clarinet create an arcane landscape for Weber to wander across. Each number draws on a different form of influence's flow pattern(s), but both speak to a kinship forged through the eternal search.

The remaining two-thirds of the program presents more questions than answers, leaving expectation out in the cold. A peripatetic pair, Liebowitz and Payne prefer to keep ears guessing. On "Desert Dance" they gambol across a rutted surface, with "Secrets" they play on fragmented ideals and feisty displays, and through "Tempest" a title's truths are realized in Sturm und Drang. "Notes On A Dream" and "Hidden Canyon," whether viewed alone or together, prove to be fantasias fostered through patience and deep thinking. And that simply leaves the album-closing "Vanishing Point," a tale of abstract expressionism that's nothing like the retreat implied in its name.

While it's true that the dicey designs of Liebowitz and Payne are more for the wilds than the mild, there's much wisdom and contemplation to be carried away from this music. Spiderwebmandala sets the mind in motion.