By Donald Elfman
December 7, 2007
Sign in to view read count 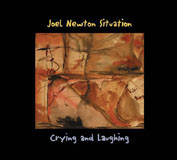 How about this—a band that works together regularly, playing music that is an astounding mix of free and composed with dashes of dance, minimalism and group improvisation? Guitarist Joel Newton is the composer here, and he has done up half-a-dozen ways for his band members to show off their best stuff as well as to give life to his rich creations.

Let us direct listeners first to the gorgeous "New Day. It's a hymn, it seems, to the glory of creation itself and also a damned pretty ballad. Ben Stivers plays keyboards and beautifully shadows the statement of the melody, which seems to grow as it unfolds. It's a kind of mission statement for the album—immediately accessible yet suggestive of new colors. The players sound like a new/old organ group and they make the most of this simple yet powerful tune.

Then you might try "Octopus Pants. A sea creature is at home in its world and its movements start off in a "funk and then become a kind of perpetual mobile of underwater activity. This is smart and appealing new music and it most certainly helps that these players—Newton, Ben Stivers, Toshi Someya (bass) and Eric Halvorsen (drums)—have had the opportunity to work up a sensibility that gives them a group identity.

The title tune is a little gem—a suggestion of a dark and new samba that quietly grinds on in its subtle way and makes its whole journey in just over two minutes. Newton solos over the groove and is eloquent and passionate while barely getting above a whisper. The tune is a model of expressive economy.

Complementing the written tunes are three improvisations, and it's to the credit of these musicians that they feel part of an organic whole, as well as important statements on their own. "Esopus (an American Indian tribe from upstate New York and a town and magazine from that area), a nearly twelve-minute work, is essentially a sonic landscape that moves from color to color yet still manages to feel structured. Newton says of the music on this album, "[it's about] how we interpret songs and how we interpret a blank space.