Crosscurrents at the Michigan Theater in Ann Arbor 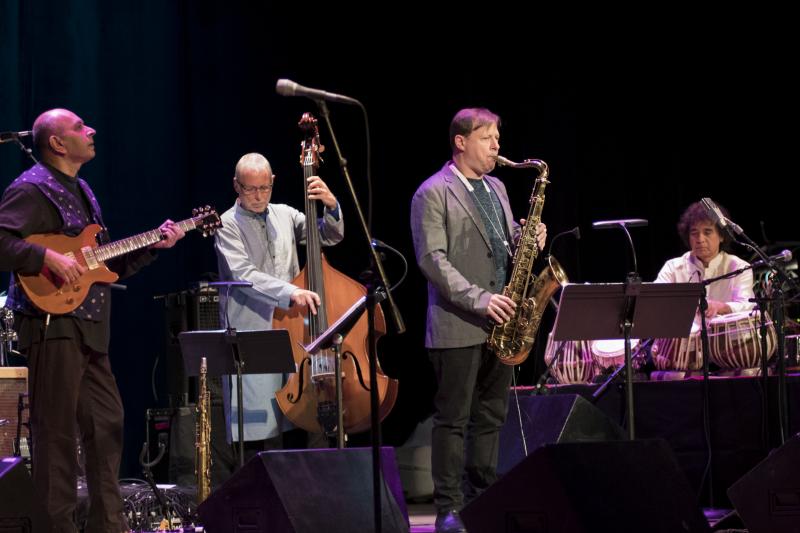 When it comes to forward-thinking performances and music of the finest lineage, few concert series can rival those presented by the University Musical Society. In tandem with the University of Michigan, UMS recently launched their 139th season. Furthermore, as part of its 24th year of jazz presentations, the organization recently hosted a pair of musicians who both have appeared in Ann Arbor with their own groups a total of four times each. As such, it was a natural evolution to find bassist Dave Holland and percussionist Zakir Hussain joining forces at the Michigan Theater for a pan-ethnic presentation that bristled with excitement and offered sustenance for the soul.

Without exaggeration, Holland and Hussain assembled a true supergroup comprised of both jazz and Indian musicians, namely Chris Potter on saxophones, Sanjay Divecha on guitar, Louiz Banks on piano and keyboards, Gino Banks on drums, and vocalist Shankar Mahadevan. Seated cross legged on a riser surrounded by his tabla drums, Hussain led the cast with precision and joyous abandon in a manner that easily connected with the audience. Over the course of about two and a half hours and eleven numbers, it became quite apparent that this ensemble was having as much fun as the sold out crowd who seemed to hang on their every note.

Opening with "Shadows," Potter's soprano brought a jazz-inflected tone to the proceedings, even managing to recall the standard "Caravan" in spots. Another Louiz Banks original, "Dove" also sported a jazzy outlook, first via the composer's sparkling Jarrette-esque piano introduction and then with Potter's advanced tenor blowing. Hussain even got in on the act, his conga type groove recalling the type of fills guys like Ray Barretto played on those hard bop records of the '60s.

Like so much of the evening, there was an ebb and flow to the program, which was balanced by different sized groupings that allowed for musical socializing among friends. "Hope" featured just Potter, Holland, and Hussain and their three-way conversation never came off as one-upmanship. Instead, they seemed to listen intently to one another, allowing the spirit of the moment to dictate their own musical route. A positively beaming Holland seemed to revel in these moments as he conversed with his compadres.

One of the darlings of Bollywood and an international sensation, vocalist Shankar Mahadevan took the stage midway to wild cheering and applause. With superb diction and fluency, Mahadevan delivered "Rama Rama" over Holland's drone which then developed into a fluid exchange between the two and a perfect melding of jazz and Indian sensibilities. The same could be said of "Doors of Desire," except that it would be Hussain matching wits with the vocalist, their bristling and rapid-fire lines increasing in speed as short bursts of hiccups. Towards the piece's conclusion, drummer Banks unleashed a feisty solo that perfectly meshed the various sides of his personality and reached such a fever pitch that at one point he eschewed his seat in favor of standing.

With a sense of deep knowledge and a seasoning of wit, Hussain's banter helped to further illuminate the history behind the music and the nature of the group's experimentation. Taking its cue from Hollywood's epic soundtracks, "Eena Meena Deeka" swung like a big band in the guise of a twelve-bar blues and hinted at the American influence on the Indian film industry. "Finding the Light" was a chance for just Holland and Hussain to speak their minds, the pair clearly inspired by each other's ability to bask in the moment. Hussain's hands and fingers would fly across his drum heads in melodic and rhythmic spurts with him fine tuning on the fly. It was as much a visual pleasure as an aural one.

Mahadevan would return to offer his iconic "Breathless," an aptly-titled number that blossomed with phrase after phrase of continuous 16th note runs. As the whole band reached a fever pitch, this bacchanalian display threatened to split open at the seams. Not surprising, the audience demanded an encore which was whole-heartedly embraced by the ensemble.

As a celebration of the universal nature of music, Crosscurrents proved that distinct cultures often have more in common than might first be obvious. In processing this melding of various styles, Hussain as one point quipped, "We don't call it fusion, but the world needs to call it something." Whatever one chooses to call it, let's just say that it solidly came together and quenched everyone's musical thirst in a way that no one will soon forget.