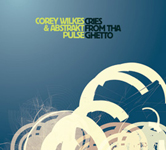 Chameleonic in his versatility, it's easy to see why Mitchell picked Wilkes to fill Bowie's spot. On the Jazz Messengers-inspired swing of "First Mind" and "Levitation" he recalls the soulfulness of Lee Morgan, the dexterity of Freddie Hubbard and the harmonic sophistication of Woody Shaw, without resorting to imitation. "Villa Tiamo," reveals his debt to Bowie with expansive pitch bends and half-valve tonal smears, an ability showcased to even greater effect on the haunting dissonances of "SICK JJ" and the labyrinthine "Visionary of an Abstrakt." Conversely, his tender muted refrains on the lush Milesean ballad "Rain" show great restraint.

A diverse session, "First Mind" and Levitation" offer a modernistic spin on classic hard bop conventions, while numbered "Abstrakt" interludes spotlight each member of the group in vociferous freeplay. "SICK JJ" travels further out—a menacing fever dream awash with coruscating electric guitar feedback, rumbling electric bass tones and a thicket of caterwauling horns. "Visionary of an Abstrakt" augments spry free bop with a string of searching solos including episodes of unearthly kaleidoscopic bass harmonics and spectral bell-tones. Straddling the line between tradition and the avant-garde, "Chasin' LeRoy" and the lyrical title track encompass the best of both worlds.

Expanding beyond the stylistic limitations of his debut album, Cries From Tha Ghetto presents a richer side of Wilkes' artistry, one that lives up to his potential.