BY MARK CORROTO
September 1, 2010
Sign in to view read count 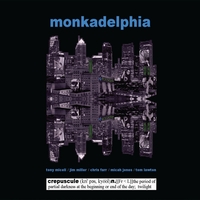 At first glance, Monkadelphia might be confused with the Belgian religious monks who brew dark beers. However, these postulants are, instead, a cover band for the jazz high priest of bebop, Thelonious Monk. WithCrepuscule, Monkadelphia releases the follow-up to its self-titled debut.

As Monk cover sessions tend to go, bands generally opt for the far ends of the spectrum, either replicating Monk's style with exacting technique or reconfiguring his music into something unaccustomed. Monkadelphia opts for a satisfying middle- ground, something Monk-a-philes can appreciate. The all-Monk repertory band plays—and seemingly lives—the music, creating a successful tribute.

While the band features pianist Tom Lawton, this is not a piano-led tribute to Monk. And while Lawton flavors the recording with Monk-like gestures, he doesn't parrot Monk's style. For example, on "Reflections," Lawton floats a samba feel under the gentle surf of saxophonist Chris Farr.

The quintet's aim is to spread the leadership and soloing amongst the players. On "Bright Mississippi," vibraphonist Tony Micelli trades off some fleet mallet work with Farr and bassist Micah Jones, who races with impressive agility through his solo. Again, on "Green Chimneys," the band passes around the melody, beginning with Jones. Where a "Fake Book" band might have covered the heads and changes, the five musicians pass the ball with Harlem Globetrotter ease, allowing them to score at will.

Highlights are obscure Monk tracks like "Skippy" and "Humph"— two tunes that are masterfully hard in their simplicity. The quintet navigates them as if they were child's play. Drummer Jim Miller plays the changes at breakneck speed, prodding each player to soar. Listening to this band, it's possible to imagine Monk thinking, "Ain't that a bitch!" Indeed.