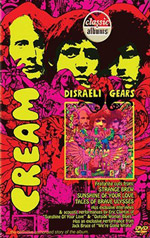 The band's 1967 classic Disraeli Gears is analyzed, along with the group's rise to fame. Rolling Stone magazine senior editor David Fricke aptly describes the band's overall aura; the trio's lyricist, Pete Brown, comments about his initial encounter with drummer Ginger Baker. Atlantic Records honcho Ahmet Ertegun recounts the time frame leading to the band's contract, as well as their artistic chemistry and the ear-splitting sound levels they passed through stacks of Marshall Amps.

In other spots, the musicians discuss the magnitude of the late producer Felix Pappalardi, who was instrumental in their evolutionary development. Clapton—with guitar in hand—explains and reenacts licks and chord voicings to pieces like Cream's mega-hit, "Sunshine of Your Love. Bassist/vocalist Jack Bruce and drummer Ginger Baker provide anecdotes which are sometimes paralleled within the footage. Also included are snippets from Cream's 2005 reunion concerts at London's Royal Albert Hall.

This is a compelling and insightful documentary, featuring thirty minutes of additional footage not originally shown on the TV version.