By Troy Collins
February 22, 2009
Sign in to view read count 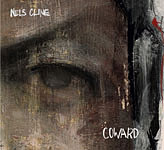 Since being recruited by Wilco in 2004, guitarist Nels Cline has enjoyed a level of notoriety previously unimaginable for an avant-garde instrumentalist. Cline's career actually dates back to the late seventies, when seminal efforts with his twin brother percussionist Alex Cline, multi-instrumentalist Vinny Golia and bassist Eric von Essen cemented his reputation as a figurehead of the West Coast underground creative music scene.

Traversing multiple scenes, he has enjoyed a diverse career as a sideman to fellow iconoclasts like Carla Bozulich, Thurston Moore and Mike Watt. Entirely deserving of the title "Guitar God" as bestowed upon him by Rolling Stone Magazine, his interests and influences are as varied and boundless as his imagination. Nowhere is his eclectic sensibility more apparent than on Coward, his first solo outing.

A solo guitar record in name only, Cline overdubs a number of exotic instruments alongside his trusty six string, from zithers and autoharps to Korg synths and drum machines. Weaving an intricate web of cantilevered loops into a subtle, shimmering mosaic, the majority of the session is austere and contemplative. There are brief moments of abstruse pointillism and ecstatic release, but for the most part the mood is serene, laced with lush interludes of breathtaking splendor and hallucinatory psychedelia.

The album's conceptual centerpiece, "Rod Poole's Gradual Ascent to Heaven," is a homage to the late microtonal guitarist, a close friend of Cline's, who was murdered in 2007. Languorously ascending to a heartbreaking finale, this hypnotic raga encapsulates the delicate sophistication of Poole's work in the record's most touching performance.

Other tunes employ similar strategies to different ends. On "Thurston Country" (for Thurston Moore of Sonic Youth), Cline enthusiastically hammers away on a series of oblique overtones that invoke the legendary band, accented by a yearning chorus that would make Radiohead proud.

Cline's limitless creativity offers a range of expression, from the dour drone of the opening "Epiphyllum" to the opulent minimal refrains of the ethereal closer "Cymbidium." The episodic "ONAN Suite" veers from the sublime to the profane, modulating from evocative psychedelic textures and kaleidoscopic colors to crass metallic textures and pedestrian breakbeats.

Coward is a brave, beautiful and endlessly revealing album. Far more daring than the average solo guitar record, this is an expansive journey into the mind of one of our most gifted and creative artists.