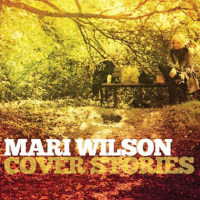 Back in the 1980s, when she was renowned for her retro beehive hairstyle and her spectacular live shows, Mari Wilson had a string of chart-making hits that included "Just What I Always Wanted" and "Cry Me a River." These days, the only remaining vestige of that hairstyle is in the name of her record label. More recently, Wilson has appeared in musical theater (including playing Dusty Springfield in Dusty: The Musical), been a BBC radio presenter and, significantly, started the trio Girl Talk with Barb Jungr.

Compared to her albums Dolled Up (Beehive, 2005) and Emotional Glamour (Beehive, 2008), Cover Stories marks a new direction for Wilson, as it consists solely of cover versions without any of her own compositions. The album features eleven of Wilson's favorite songs, lending it a certain similarity to Jungr's album The Men I Love: The New American Songbook (Naim, 2010). However, unlike Jungr's choices, four of Wilson's selections are by female songwriters and six are by non-Americans.

Another similarity between Wilson and Jungr is that, rather than recording a straightforward cover version, they each often radically reinvent a song, sometimes making it unrecognizable in the process. One of the best examples of Wilson doing this is her stunning version of "Be My Baby," originally recorded by The Ronettes. Stripping away Phil Spector's wall-of-sound production, she is accompanied by atmospheric acoustic guitar alone, played by John Parricelli. She savors every word of the verses as well as the famous chorus, milking them all for emotion. Wilson achieves similarly miraculous transformations of "Don't Let the Sun Catch You Crying" (originally by Gerry and the Pacemakers) and Dusty Springfield's "I Only Want to be with You"—the latter her first ever Springfield cover.

If those examples suggest that Wilson is stuck in some sixties time warp, nothing could be further from the truth. Her choice of songs demonstrates that she has an ear for a great song and its possible reinterpretation. While including some songs by well-known artists, The Beach Boys' "Disney Girls" and The Bee Gees' "First Of May" for example, the eclectic array of tunes also features the lesser-known Caitlin Rose, Gillian Welch, Ron Sexsmith and even Big Audio Dynamite.

Most of all, Cover Stories lives up to its title. Every track is a cover version, but each is also a story in its own right. And Wilson is a story teller par excellence, extracting meaning and emotion from each one and communicating them impeccably to her audience, her voice as formidable an instrument as ever.

Don’t Get Me Wrong; Disney Girls; Be My Baby; Don’t Let the Sun Catch You Crying; I Only Want To Be With You; First Of May; Own Side; Right About Now; Dear Someone; They Don’t Know; Everybody Needs a Holiday.