By Karl Ackermann
September 6, 2018
Sign in to view read count 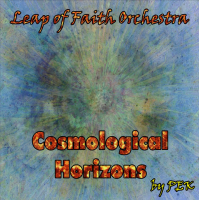 David M. Peck's (PEK) Leap of Faith collective is brought together in its largest formation of twenty-four musicians for a marathon performance of the leader's Cosmological Horizons composition. This second of two annual performances of an orchestra culled from the Evil Clown label's various groups (String Theory, Mekaniks, Metal Chaos Ensemble, etc.) was held in Killian Hall on the Boston campus of MIT.

As he often does, PEK composes a single, extended piece for the duration of the performance; the title track here clocking a bit over seventy-seven minutes. For several years PEK has utilized his Frame Notation technique where the score is seen in written descriptions and archetypal symbols within duration bars. This allows the musicians to immediately sight their cues as well as providing a view of the larger scope of the piece. To see the score laid out in hard-copy form is to witness a cross between visual art, Gantt charts and complex schematics. Somehow, PEK makes it all work cohesively.

"Cosmological Horizons" opens in a sea of tranquility but that stop is brief. A gong, and gently ringing bells, are joined first by sharp percussive effects, then strings. Reeds and horns build in layers, along with an assortment of PEK's favorite non-instruments. Somewhere around the halfway mark it feels like everything comes together—not in harmony—but in something much closer to approaching chaos. Eric Zinman's piano temporarily re-grounds the ensemble only to have the larger group thunder back with a disembodied ferocity. The construction of PEK's compositions offer few predictable rudiments in the structure of the composition; melodies appear as transitory moments of discovery, barely audible through the collective improvisation. It is experimental, and abstract, and certainly aimed at the open-minded listener.

Cosmological Horizons is also available digitally and includes an additional twenty-one minute track—"Boundaries"—performed by a sub-set of the full orchestra. PEK's Evil Clown label has also undergone an artistic makeover in the packaging of it's releases. Beyond eliminating the jewel case, Cosmological Horizons includes a twenty-three page insert that illustrates the Frame Notation, coding of instrument groups and score. It's a colorful, informative and entertaining visual to accompany the music.