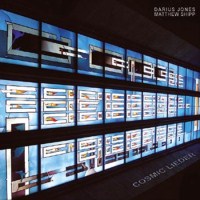 Released concurrently with the expansive live double album, The Art of the Improviser (Thirsty Ear), which showcases Shipp's artistry in both solo and trio settings, this intimate studio date presents yet another facet of the pianist's abilities as part of an ongoing celebration of his 50th birthday. With a discography featuring appearances on more than 65 titles released since 1987, and nearly 40 of those made as a leader or co-leader, Shipp's vast experience outweighs Jones' by well over a decade. Despite their age disparity, Jones makes a keen partner for the elder pianist.

Currently serving as a member of numerous high-profile ensembles, including Little Women and Mike Pride's From Bacteria To Boys, Jones' phenomenal debut Man'ish Boy (A Raw & Beautiful Thing) (AUM Fidelity, 2009) was widely and justifiably lauded as the premier of an important new voice on alto. Though still relatively young, Jones already possesses an utterly distinctive identity as an instrumentalist. He wields a biting tone and commanding phrasing on his chosen horn that is instantly identifiable.

In spite of stylistic preconceptions fostered by their avant-garde credentials, the session opens on a tender note with "Bleed," as Jones and Shipp each conjure poignant statements with lyrical restraint. The album's overall vibe slowly amplifies in intensity with each proceeding cut until a third of the way into the record, when "Multiverse" ascends to a fervent assault of pounded note clusters and overblown split tones. "Mandrakk" follows suit thematically, albeit at a far quieter volume; Shipp plucks metallic pizzicati from inside the piano while Jones' complements his efforts with controlled multiphonics and diaphanous altissimo refrains.

The date subsequently vacillates between sonic extremes, gracefully merging the fragile euphony of bittersweet harmonies with strident dissonances and brash intervals, yielding a singularly melodic sensibility that is equal parts introspective and extroverted. Fragments of standard chord changes even materialize on occasion; "Jonesy" adopts the harmonic progression of John Coltrane's "Giant Steps," warped and modulated into a mosaic of phantasmagoric beauty.

Jones' vocalized timbre and rapturous delivery is comparable to a singer's dynamic range, as Shipp unleashes a labyrinthine series of melodic contours that escape the gravitational pull of standard harmony. Relatively brief and to the point, the oblique angles and abstruse detours of each concise tune invoke the art song tradition, making Cosmic Lieder an entirely appropriate title for this auspicious meeting.

Visit Darius Jones and Matthew Shipp on the web.