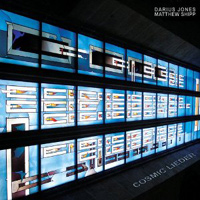 Duets with saxophonists loom large in pianist Matthew Shipp's discography. His first release featured one such with a young Rob Brown—Sonic Explorations (Cadence Jazz, 1988)—and there have been further outings over the years with other reed men, including Roscoe Mitchell, Ivo Perelman, Evan Parker and Sabir Mateen. To add to that impressive roster comes a worthy addition in Cosmic Lieder, with talented newcomer alto saxophonist Darius Jones, who received serious plaudits for his stunning 2009 debut Man'ish Boy (A Raw & Beautiful Thing), also on the Aum Fidelity imprint.

Both men sublimate their considerable talents to discover a shared conception of bridled passion and abstract expression, distilled into 13 short vignettes in an intimate studio program just shy of 40 minutes. Though jointly credited, each piece has the feel of spontaneous but measured generation, largely confined within the initial parameters. There is no grandstanding: although the two participants are active virtually the whole time they intertwine with high levels of responsiveness, demonstrating both refined sensibilities and big ears. Despite his penchant for aching melody, Jones deals mainly in the austere and atonal, while Shipp avoids his signature trait of insistent repeated patterns but still sounds like no-one but himself.

Absorbed in their own sound world, the pair creates an overall mood of anguished introspection. Against that grain, the opening "Bleed" pitches keening alto against austere romantic piano in a folk-inflected extemporization which speaks of elemental longing. A similar feeling pervades the start of "Ultima Thule" before increasing fragmentation sets the scene for much that follows. While Shipp's thunderous residencies in the bass register often prompt Jones to guttural siren songs edged with controlled multiphonics, the reed man at other times leavens his litany of distortions with piping undulations as on the staccato "Motherboxxx." Overt structure surfaces on "Mandrakk" where passages of plucked piano strings and juddering alto harmonics sandwich a sweetly contrasting encounter between rippling piano and melodic saxophone. The twosome never outstay its welcome, and ultimately Cosmic Lieder provides a strong complement to Shipp's outstanding Art Of The Improviser (Thirsty Ear, 2011), showing yet another side to his artistry.