BY DAN BILAWSKY
February 11, 2015
Sign in to view read count 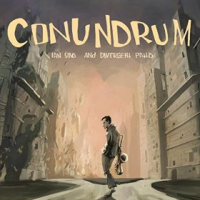 The title of saxophonist Ian Sims' debut recording is a bit of a misnomer, for his music isn't trying, confusing, or difficult to unravel. This is certainly modern jazz, but it's not modern jazz of the confounding and disorienting variety.

For his first album, the Baltimore-based tenor man put together a quintet of sure-footed modernists dubbed Divergent Paths. The band includes Paul Bollenback, perhaps the most under-appreciated guitarist operating today; drummer EJ Strickland, who slices and dices his way through these songs, bringing a tight and focused sound to the project all the while; bassist Ed Howard, who's played with everybody from drum icon Roy Haynes to trumpeter Eddie Henderson to pianist David Berkman over the past few decades; and trumpeter Alex Norris, who proves to be an empathetic front line partner for Sims. When traveling as a single entity, Divergent Paths converges on Sims' original music, coloring each piece with different shades of emotion.

The album opens on the title track, a number that's presented as a tale of two horn men. But as the song plays out, the rhythm section interplay draws equal focus. The Bollenback-Howard-Strickland combo simultaneously provides support, conversational movement(s), and sonic surprises here and throughout. From there, the shapeless takes form, as uncertainty gives way to a pseudo-waltz flow on "Forgotten. Then there's "Cork Street Blues," a number that takes flight with an oblique stop-start unison line, and "Treacherous Persona," a piece that presents the most penetrating side of Bollenback. With those first four pieces, Sims makes his mark, establishing a group sound, projecting a complex yet accessible compositional voice, and putting his horn to good use. Further down the line there are more worthy entries, from pressure-cooker pieces like "The Eleventh Hour" to gentler numbers like "Solitude." In both instances, and virtually everywhere else, there's a wonderful sense of balance between stability and the questing spirit. It's that balance point that makes hearing Conundrum an on-the-edge-of-your-seat listening experience.