By HRAYR ATTARIAN
October 25, 2014
Sign in to view read count 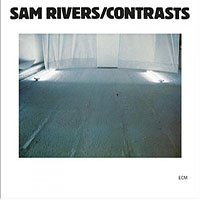 Multi reedist Sam Rivers' 1980 Contrasts in addition to being his only date as a leader for ECM, is a perfect example of his mid-career oeuvre. A sublime balance of intense, almost mystical lyricism and a singular sense of adventure permeates the album that appears for the first time in the CD format and is simultaneously rereleased on LP after 34 years of its initial appearance.

As the above demonstrates, contrasting yet complementary musical currents mark all seven Rivers originals. The impeccably constructed compositions not only to allow ample room for individual spontaneous expression but also they leave not a single note out of place despite seemingly incongruous motifs.

The poetic "Lines" is a compelling and intricately woven harmonic tapestry that revolves around Holland's melodic and free flowing solo. The ardent and dramatic interplay between Rivers and his rhythm section brings the piece to an electrifying and very logical closure.

Ingenious and versatile Lewis provides the prefect foil for Rivers on this challenging and stimulating music. Rivers' blustery tenor opens "Dazzle" with a circular and furious ramble. Lewis' resonant growling horn and Rivers' honking sax engage in an exciting improvised dialogue which sets the stage for Lewis' own intriguing explorations. The track ends with Baker's breathtakingly agile thunderous polyrhythms that stands in stark distinction to his more contemplative and no less thrilling mallet work elsewhere on the disc.

This is a welcome reissue of a long out of print gem and although stylistically it is a bit out of character for ECM, conceptually it is pure Rivers at his very best.