By BRUCE LINDSAY
January 8, 2015
Sign in to view read count 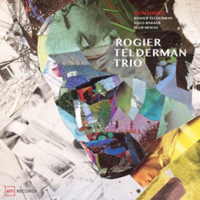 The debut recording from Holland's Rogier Telderman Trio, Contours features nine of the pianist's original compositions. In partnership with Guus Bakker on bass and Tuur Moens on drums, Telderman has crafted an album notable for its varied musical and emotional range as well as for its excellent musicianship.

Telderman's writing is melodic and lyrical but with an added edge when the mood of the piece requires it. He's jazz-influenced certainly, but classical, ambient and rock influences also find their places in his writing—there's a more soulful side to his work too, as evidenced by his writing and playing in the superb Dutch band Melphi.

There's nothing too wild on Contours, too raucous or out-of-control. There's plenty of upbeat positivity, however, as well as a selection of more measured compositions. "Skippy Mash" (great title) does indeed skip. It bounces too, thanks to Bakker's bass line. "Minor Conspiracy" is reminiscent of another European piano trio, Phronesis, in its relaxed yet irresistible groove and melody. "On A Tuesday" grabs the attention from the off—an odd mix of Telderman's repetitive rhythm, Bakker's arco bass and Moens' emphatic drumming gives way to a sweeter section dominated by Telderman's piano melody. "Slippers" is another tune that focuses on the groove—this time it's mostly from Telderman's emphatic left hand. "Song For AC" centers on its pretty melody but Bakker punctuates the tune with some strong, punchy, bass notes.

Of the gentler tunes "Sketch" is a graceful, melancholy, piece—Bakker's bass is a key factor in establishing the mood while the interplay between all three men is graceful and intricate. "Goodbye, Monsieur Belkin" is blessed with a beautiful melody, coupled with a degree of tension (for which Moens can take much of the credit) that gives it added drama. "Strange Place"—at just over eight minutes, the album's longest tune—is Telderman's most cinematic composition. An expansive number that seems to give the trio the most scope for improvisation, it appears to be heading for the album's most energetic and explosive ending before a sudden shift in tempo and mood leads to a calmer close.

Contours finishes with "Waltz," a slow and lovely tune that's notable for the restrained playing of all three musicians. It's a beautiful finale to an impressive debut album from the Rogier Telderman Trio.