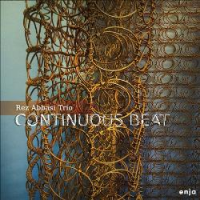 In the 17 years since Rez Abbasi released Third Ear (Cathexis, 1995), the Pakistan-born, American-raised guitarist hasn't just covered a lot of ground, he's gone from an undoubtedly talented but somewhat vanilla player to one with a distinct voice and approach. Starting with Snake Charmer (Earth Sounds, 2005) and Bazaar (Zoho, 2006), Abbasi began to find his voice, in a meeting place between the linear nature of his eastern roots and the broader harmonies of his western studies.

For Continuous Beat, Abbasi pares things down from the more ambitious Suno Suno (Enja, 2011) to a trio and repertoire originally intended for a 2011 live date with Paul Motian. When the drummer took ill (passing away the following month), rather than cancel, Abbasi recruited drummer Satoshi Takeishi—last heard on Third Ear, but with whom the guitarist had continued to play over the years—to join him and bassist John Hébert for a show in Motian's honor, leading to this 2012 recording date, which brings five new Abbasi originals together with an eclectic mix of covers.

Abbasi's technical acumen has been a given for some time, but with Continuous Beat he demonstrates a broader textural disposition; rather than applying effects he seamlessly integrates them in natural, organic fashion. His a cappella album opener, "Introduction," uses reverse-attack processing to create a near-vocal semblance of his Pakistani roots. A similar approach introduces the trio's take on pianist Keith Jarrett's vamp-driven title track to The Cure (ECM, 1990). Anchored by Hébert's unshakable bass line and Takeishi's more fluid but still backbeat-driven groove, Abbasi is free to blend quirky voicings with pitch-shifting, brief sonically altered punctuations and altered textures, as he changes pickups and uses the distance from his instrument's bridge to change his tone from tart to warm.

There may be a pause between "Divided Attention" and the skewed Midwestern roots of Gary Peacock's "Major Major," but the two pieces are joined by Takeishi's brief coda at the end of the former and his continuing intro on the latter. "Major Major" might, in fact, be considered Metheny-esque, were it not from the bassist's Tales of Another (ECM, 1977)—recorded with what would later become Jarrett's Standards Trio a full year before guitarist Pat Metheny committed the seminal Pat Metheny Group (ECM, 1978) to tape—but it demonstrates that Abbasi's roots extend beyond easy (and lazy) comparisons. Abbasi has, indeed, been informed by guitarists like Metheny and Bill Frisell, but such touchstones have long been subsumed into Abbasi's own, now equally recognizable approach.

It's an inspired date that would have been very different, had Motian been involved. Capable of broader textures but also more grounded than Motian was in his later years, Takeishi provides a surprisingly firm pulse to the metric complexities of the leader's "Divided Attention," with Abbasi's innate lyricism opening up for a more freewheeling solo segment where, overdriven and playing with a curious combination of motivic development, purposeful virtuosity and unshackled imagination, Abbasi sets the bar high for the rest of Continuous Beat—a bar that, throughout this 53-minute set, Abbasi and his trio consistently meets...and raises, time and again.