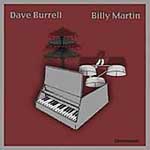 Consequences teams pianist Dave Burrell with percussionist Billy Martin of Medeski, Martin and Wood, making this a collaboration between two avant gardists separated by a generation or two. Though Burrell recorded with the likes of Albert Ayler, Archie Shepp, Pharoah Sanders and Marion Brown while Martin attended high school, any doubts about their compatibility disappear when the two artists face off on this performance, recorded live in Philadelphia. Their unique four-handed journey leads them up, over, beyond and back, locked in a deep-listening embrace that kindles sparks and flares.

With his foot firmly on the forte pedal, Burrell lets the piano ring on the appropriately titled Suspension. Martin patters solo for the first couple minutes, until the pianist finds the rhythm in the bass keys. After running their course, the two explode into inspired experimentation. Burrell and Martin work rhythmically off-kilter to create the spiky closer, "Kuliana.

For these two master improvisers, nothing seems to be impossible, and that's just the border-less territory they seek to map.