By Doug Collette
September 28, 2006
Sign in to view read count 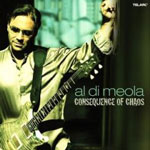 After graduating from the Berklee School of Music, Al Di Meola gained visibility as the electric guitarist in Chick Corea's best-known version of Return to Forever. With the dissolution of that jazz-rock fusion band, Di Meola pursued a variety of avenues, many of which he seamlessly recapitulates on Consequence of Chaos.

The title may refer to the recording process of the disc or world events, but it may also be intended ironically. The atmosphere of the music in its varied textures is almost (but not quite) unremittingly bright in its breezy languor. Listening to the disc from start to finish is tantamount to an aural travelogue, the likes of which takes the listener from dawn to dusk and beyond in a tropical air.

You may find the compact disc stickered and emblazoned as "A Return to His Solid-body Electric Guitar. But the reality of the album is something different, as represented by the portrait of Al Di Meola wearing the electric instrument on the front cover, a shot that immediately gives way to a photo of him with a classical acoustic as you first turn the page of the CD booklet. Accordingly, on the opener, "San Marco (moderna)," electric and acoustic guitars are interwoven, as is the case through much of the album.

Some measure of sterility manifests itself in such (too) careful arrangements, as on "Tao. Di Meola's electric guitar does, however, contain a heated edge on "Turquoise, while flamenco guitar and percussion interchange with the piano of his former mentor Barry Miles. The keyboardist plays a recurring role throughout the album, and it's a measure of the guitarist's reconnection to his past to play with the man with whom he collaborated just prior to joining Corea and RTF.

Speaking of which, "Red Moon is one of the least interesting cuts on the CD because it is so reminiscent of vintage Return to Forever. The acoustic duet between Di Meola and Corea on "Cry for Me is much more intimate and, perhaps not coincidentally, a much more heartfelt expression of their camaraderie.

The dizzying guitar figures that bring "Tempest to a close are indicative of the cumulative intensity of this album. Di Meola skirts muzak on "Azucar through the quick time changes and rhythmic flourishes from Gumbi Ortiz of the Di Meola road band. It'll be interesting to hear how, as the group tours in support of this album, their live performances evoke atmosphere comparable to this studio work. The shadowy "Sanctuary" is in high contrast to the balmy air that surrounds it.

At approximate midpoint of the album, "Hypnose demonstrates how the music on Consequence of Chaos becomes increasingly penetrating with each successive cut. The undercurrent of momentum belies the impression of fifteen tracks as merely a collection, rather than a unified piece of work. "San Marco (Vecchio)" bookends this album, enacting a continuity that imparts additional substance to the music.