By Nenad Georgievski
September 28, 2006
Sign in to view read count 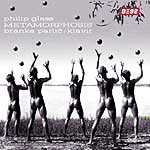 If there is one musician whose music is instantly recognizable, it's Philip Glass. His intricate melodies, repetitive patterns, combustive rhythms and sharp lyricism are just some of the trademarks that have featured throughout the different phases of his career. His music has inspired many artists, one of whom is Branka Parlic, a professor and long-time chief advocate of minimalist and avant-garde music in Serbia. Apart from giving lectures on these often different streams in modern music, she regularly performs their music on solo piano. So far, her only output, by which many know her name, is an interpretation of Erik Satie's Gnossiennes.

The music on this CD was recorded live at the Novi Sad Synagogue, which gives it a spacious feeling. It touches upon different periods of Glass' career, and these rearranged compositions can be found on his Solo Piano (CBS, 1989), with few exceptions like "Glassworks - Opening," "Modern Love Waltz" and the theme from The Hours soundtrack (Nonesuch, 2003).

Musically, the building points are still largely the same. The centerpiece of the album is the seventeen-minute "Ad Rush," a composition that Glass wrote when the Dalai Lama first addressed the public in 1981 in New York. It was originally played by Glass on organ during the Dalai's entrance into the Cathedral of St. John the Divine. Parlic elegantly passes through the mellodies, and the shimmering piano elegantly grabs the listener in its dark grip.

"Wichita Vortex Sutra" was inspired by an accidental meeting between two longtime friends, Glass and poet Allen Ginsberg, in St. Mark's Books, a popular bookstore in the East Village. The theme from The Hours soundtrack is something of a surprise. Glass' earlier works have always been favored and covered more by other artists, which has not always been the case with his later output. Regardless, both the film and the accompanying soundtrack are excellent, poignantly showing Glass' uncanny lyricism. The soundtrack was later rearranged for solo piano, and this arrangment was taken from there.

Glass' melodies are perfectly made for solo piano, and even though some of the main features in his music have rarely changed through the years, interpreting his music is not an easy task, as whoever plays these melodies will end up associated with his music. Parlic shows an exquisite touch in her interpretation of the piece, paying great attention to the varying dynamics and pace throughout. This approach enables her to produce a recording which is both heartfelt and academic in its precision. For many reasons it is an essential recording by an exceptional player, and to many, this will be a first step into the world of minimalism and the music of Philip Glass.