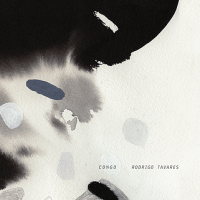 Guitarist Rodrigo Tavares cites his primary influences as bossa nova and tropicália pioneers João Gilberto, Dorival Caymmi, Antonio Carlos Jobim, Chico Buarque, Caetano Veloso, Gilberto Gil and Tom Zé. But you would not guess it from Congo, a collection of lyrical instrumentals which reference Brazil only in passing, and which consciously avoid any recognisable sense of cultural location. When composing the tunes, says Tavares, he strove to be "geographically deceiving." That approach is followed through in the arrangements and performances. Congo was recorded in Belo Horizonte, mixed in Sao Paolo and made with Brazilian musicians, but there is no paper trail. Lush and hypnotic, the album blends elements of jazz, avant rock and minimalism to create music that defies categorisation. Tavares says his key non-Brazilian influences include Brian Eno and Arvo Part, and those names edge a little closer to suggesting Congo's soundscape. Another artist who springs to mind is Sandy Bull, the genre-defying, reverb-loving, multiple fretted-instrument player whose sui-generis early albums—Fantasias For Guitar And Banjo (1963), Inventions (1965) and E Pluribus Unum (1969), all released by Vanguard—inhabit emotional and timbral territories akin to those on Congo. The key difference beween Bull and Tavares is that Bull generally recorded alone, overdubbing all the instruments himself (though he occasionally worked with drummer Billy Higgins), and on seven of the nine tracks here, Tavares works with a band. But this is not readily apparent. "Cidade Sol 1" and "Congo 2," both made without the band, are near-ringers for Bull, but so are several of the group performances, too. Congo is vinyl-only label Hive Mind's second release, following the 2017 double LP Colours Of The Night by the Moroccan guimbri player Maalem Mahmoud Gania. Unlike Congo, the geographic and stylistic locus of Colours Of The Night's is unmistakable. But both albums, in their different ways, tap into the common ground between meditative, ambient and trance musics. A delightful disc.