Dizzy Gillespie: Concert of the Century - Tribute to Charlie Parker 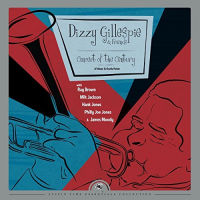 This superb album was recorded at the Montreal Jazz Festival in November of 1980. All of the principals have passed on, so it's that much more of a treat. Trumpeter Dizzy Gillespie fronted the group of Ray Brown (bass), Milt Jackson (vibraphone), Hank Jones (piano), Philly Joe Jones (drums) and James Moody (tenor sax and flute), and the few thousand folks in attendance must have been delirious with joy.

What a magnificent collection of musical geniuses. The tribute to Charlie Parker (Bird) by his contemporaries, all of whom were at the top of their game at the performance, is rife with stunning performances. The nearly 11-minute "Blue 'n' Boogie" opens with a brief soaring trumpet intro before the band comes in. Moody's tenor follows and laughter can be heard onstage as Jones' drums propel him to reach further. Then comes Bags (Jackson), commanding the vibes as few have. Gillespie comes back in for a jaw-dropping solo before pianist Jones takes his turn, and then they all trade fours. This is one of the most exciting tunes ever captured on a recording, and that's only the first of eight amazing tunes; at the end, the audience is rapturous.

Gillespie introduces Jackson, who plays a superb "If I Should Lose You" that is tender and delicate. Moody takes center stage on flute for "Darben the Redd Fox" and the rhythm section comes along for the journey. Hank Jones opens "Time On My Hands," with vibes and bass joining the band leader's trumpet. The ballad is performed by this stellar cast with the sort of nuance that only masters achieve. It backs out the way it came in, with a vibe solo, then piano, and then trumpet. Philly Joe Jones sets up "Get Happy" as Gillespie and Jackson take off at full throttle. The band mates each take a section, and the drummer keeps the engine rocking. "The Shadow of Your Smile" is introduced by Moody's high register saxophone squeaks, with Hank Jones' answering in kind. The tune is then played straight, although with some speed, with Brown heard prominently underneath the tenor and piano. At the halfway point the vibes and drums check in and the pianist takes a solo, his command of the instrument, glorious. Gillespie's dizzying solo follows and Moody takes it out with his tenor.

Next up is "Bass Solo/Manha de Carnival/Work Song," in which Gillespie introduces Brown as "the Boss of the Bass," which the bassist then clearly demonstrates. Brown has the stage to himself and gives a tutorial on the possibilities of his instrument with spellbinding lines. As piano and drums join, the audience applauds loudly. Brown then breaks into "Work Song," bending notes and picking at both ends of the instrument while floating back to "Manha de Carnival." It's one of the great performances on double bass. The closer, "Stardust" is a vehicle for Gillespie, and demonstrates why he was one of the great trumpeters in the history of jazz.

This recording stands with Oscar Peterson's Big Six (also from Montreal) as one of the great live performances committed to tape and now to compact disc. In a five-star world, this is a ten-star recording.

Blue 'n' Boogie; If I Should Lose You; Darben the Red Foxx; Time on my Hands; Get Happy; The Shadow of Your Smile; Bass Solo / Manha de Carnaval / Work Song; Stardust.