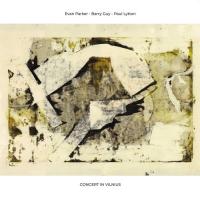 In a world riven by climate chaos and the attack on truth, on both sides of the Atlantic, it is reassuring that some things remain constant. At this stage of an existence dating back to the early 80s, the superlative British trio of saxophonist Evan Parker, bassist Barry Guy and drummer Paul Lytton plays only a few concerts each year. When they do, the results tend to the spectacular, and Concert In Vilnius only affirms that. In fact, when taken together with Music For Mossman (Intakt, 2018) and Live At Maya Recordings Festival (NoBusiness, 2011), it suggests something of a late career apotheosis.

As ever, the dizzying unfettered interplay when all three push the foot to the floor can be exhilarating, sparking a visceral thrill. Their collective imagination and speed of response betrays no age-related dampening of the firing neurons. Momentary connections, which vouchsafe intent, listening and shared purpose, illuminate the dense organic flow. But spacious interludes, either alone or in varying permutations, intrude often on this particular occasion, offering showcases for the extraordinary skills of the three principals and allowing more direct appreciation of the emotional ambivalence which underpins their abstract rhetoric.

As well as streams of hyperspeed clipped notes, Parker utilizes circular breathing as part of his armory, which he deploys as needed in the moment. It's no mere technical exercise; so unobtrusive is the technique that you can forget how the simultaneously gruff and yelping contours originate. Guy's approach is built upon contrasts: melodic and percussive; spiky and resonant; bowed and plucked; high and low; quiet and loud. If the range encompassed wasn't remarkable enough, the rapidity with which he flits between them can be astonishing.

Alongside Tony Oxley and Paul Lovens, Lytton stands as one of the founders of the now ubiquitous European drumming style which blends impulse and timbral variety. He remains one of its most provocative practitioners stringing together small gestures of clatter, clank and clang to further some larger architecture.

But, of course, it is how all this is combined which is where the magic resides. "Part I" begins in considered fashion, as if eavesdropping on three acquaintances conversing, as indeed they are, eloquent, informed and hyper attentive, ready to rebut, endorse or debate. And always ready to spin off on rewarding tangents. Parker's unaccompanied skirling opens "Part II," evoking bagpipes and folk airs at times, until sustained split tones prompt an ominous bass throb and drone. Then later, as Guy ends a solo on a rhythmic phrase, Parker picks up the same cadence to initiate another ferocious snarling dash.

On "Part III," there's an episode when Guy and Parker fuse in cyclical movement until joined by Lytton's frothing cymbals, which incite the breakneck assault on another wondrous pinnacle. The succinct concluding "Part IV," likely an encore, returns to the same measured mode with which they began, begetting the wild applause appropriate to such a nuanced and exhilarating performance.