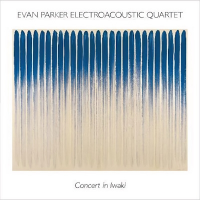 The year 2021 marked the twenty-fifth anniversary of the first recordings made by Evan Parker Electro-Acoustic Ensemble. It also ended a somewhat fallow period, Hasselt (Psi, 2012) having been the ensemble's most recent release; 2021 brought a flurry of electro-acoustic releases, with Concert in Iwaki following hard on the heels of Warszawa 2019 (Fundacja Sluchaj), and Fixing the Fluctuating Idea (Les Disques Victo), the latter recorded at the 1996 Victoriaville festival with Sainkho Namtchylak.

However, despite the convenient timing, Concert in Iwaki is significantly different to the other two 2021 releases as it is credited to Evan Parker Electroacoustic Quartet, the four members being Parker on soprano saxophone, Paul Lytton on percussion and live electronics, Joel Ryan on computer music instruments, and Lawrence Casserley on a signal processing instrument, all stalwarts of the larger ensemble. This quartet version was formed in response to an invitation from Japan which proposed to organise a Japanese tour concentrating on the electroacoustic aspects of Parker's work. On that tour, this album was recorded on October 5th 2000 at Iwaki City Art Museum, Fukushima, a large, resonant space.

The music comprises three extended tracks totalling seventy minutes. It bears all the hallmarks of the larger ensemble's music, but with less going on, particularly in terms of treatments of the music. There is clearly good understanding and interaction between the four players, with Parker leading from the front. When one considers that Hasselt credited fourteen musicians, half of whom were using electronics and/or processing, it seems logical that the music here would be simpler and communication better. As is always the case with resonant spaces, the hall here is effectively a fifth player. To their credit, the four human players soon found the best ways to play with the space, the end results doing justice to all five.

Parker's own comment on the album is both true and wittily quoteworthy: "The music here still sounds fresh and, in fact, could have been recorded tomorrow." Yes, spot on, Evan.