By John Sharpe
January 9, 2016
Sign in to view read count 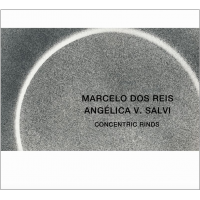 Guitarist Marcelo dos Reis has become a fixture on the Lisbon experimental music scene, where he also helms the newly created Cipsela imprint. His guitar contributed an attractive wild card element to Chamber 4's eponymous release (FMR, 2015) and he has worked with Elliott Sharp, Burton Greene and Evan Parker among others. Among his many outlets is the string trio Open Field, with whom he first encountered Spanish harpist Angelica V. Salvi. In fact it was Parker who suggested that the two explore the possibilities of the guitar/harp duo away from the larger group contexts in which they had previously collaborated.

Since then they have developed the singular double act heard on Concentric Rinds. All eight cuts are completely improvised, but that doesn't mean that melody and rhythm are absent. Indeed based on the output of dos Reis and trumpeters Luis Vicente and Susana Santos Silva and outfits such as Ozo, there seems to be a strand of Portuguese improv in which these features stand full square alongside the more expected unusual timbres and abstract expression. One or the other participant often holds down a insistent harmonious figure against which the other can pitch their lines. Both prepare their instruments and the resultant novel textures and random ingredients greatly benefit the discourse.

They bring together a range of influences including folk, blues, improv, classical and flamenco in a dramatic series of perfectly formed extemporized performances, which travel an arc from the tuneful to the austere, almost as if luring the listener into their soundworld. The gorgeous juxtapositions of tumbling arpeggios and chiming crystalline droplets on "Spirals" give way to metallic abrasions and mysterious deep tolling resonance of the final "Surface," via the crabbed stepwise exchange of "Concave." They demonstrate such a strong sense of unity that it's not always possible to tell who plays what. So on "Depth," is it the bowed drone or the kalimba like notes which originate from the harp? Or is it the guitar? But the striking combination and the emotional charge it generates is so winning that ultimately it doesn't matter.