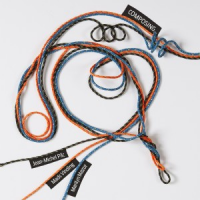 A magical mystery tour with two heavies of the avant garde and one good old reliable jazz bassist who fits in anywhere. To be more precise: American/Danish percussionist Marilyn Mazur, she of the frizzy hair and intense eyes; French pianist Jean-Michel Pilc, he of the goatee beard and dark, moody gaze; and Denmark's Mads Vinding, he whose eyes and beard (or lack of one) fit in anywhere.

Lurking in the wings, are two muses. First there's Wayne Shorter, with whom Mazur used to gig and who once said: "To hell with the rules, I'm going for the unknown." Secondly, there's Arnold Schoenberg, the late Austrian composer, who once said, "Composing is improvisation slowed down."

The session takes its title from the latter. Once it was in the bag, as you might expect, Mazur and Pilc decamped with no further comment, leaving good old reliable Vinding to explain: "There was no talks (sic) about tunes, keys, solos, tempos—as a matter of fact Jean-Michel and Marilyn hadn't even played together before. We just started playing to see where the music would take us. It was quite a trip.

"We did two long sets and occasionally a tune would emerge but most of the time we where (sic) in uncharted waters, taking us to places we hadn't been before. This is the ultimate way of improvising."

In its final incarnation, the music forms two suites, numbered one and two, a ballad in G, Sammy Fein's "Alice In Wonderland" and Guy Wood's very lovely "My One And Only Love."

It's by no means as way out and inaccessible as you might expect. Although, that said, "My One And Only Love," arriving out of the blue towards the end of the hour-long session, comes as a very pleasant relief from the "uncharted waters."

Proving that, as Groucho Marx once said, "Well, Art is Art, isn't it? Still, on the other hand, water is water. And east is east and west is west and if you take cranberries and stew them like apple sauce they taste much more like prunes than rhubarb does."