Maximize your visibility at All About Jazz by upgrading your musician page from standard to premium. With it, you'll receive All About Jazz home page exposure, a highly stylized / ad-free musician page with bonus features and benefits, an ad, plus you control where you sell your music and so much more.
Learn More
33 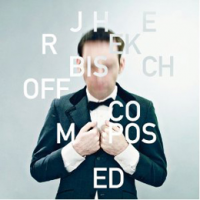 The touring life isn't the one to which every musician aspires. Sometimes the call of the home, fireside and comfy slippers is stronger than that of the road. Seattle-based Jherek Bischoff—lately of Parenthetical Girls and The Dead Science—prefers working on music at home, producing and arranging as well as composing and playing. Composed, his debut under his own name, is filled with stylish, lushly-orchestrated, songs that readily affirm his preference.

Bischoff's inventive compositions combine with the voices of his guest singers to give a real sense of variety to the album. His choice of singers is inspired: every one of them brings a fresh sensibility to the songs. There's also a judicious selection of guest musicians: guitarist Nels Cline's contribution ("Blossom") is particularly striking.

David Byrne's voice is instantly recognizable on "Eyes," which he co-wrote with Bischoff. The gentle lilt of the melody and the romantic imagery of the lyrics combine to create an immediately engaging song. Another distinctive vocalist and Byrne collaborator, Brazilian musician Caetano Veloso, appears on "The Secret Of The Machines." The lyrics are adapted from Rudyard Kipling's 1911 poem of the same name, Veloso's luxurious voice giving the images of technological advance a romance of their own.

"Insomnia, Death and the Sea" is the album's most cinematic and portentous song. Co-composer Dawn McCarthy's voice soars over a string arrangement that veers between a doomy starkness and a Phil Spector-esque Wall Of Sound.

It's "Young and Lovely," however, that delivers the knockout musical blow. Another full-on soundscape of percussion and strings drives Zac Pennington's crystalline vocals (another member of Parenthetical Girls)and SoKo towards a sudden downward shift in tempo for a mid-section enlivened by brass and reeds redolent of Weimar cabaret. Then strings and drums return, Pennington takes the vocal lead and everything flies towards a dramatic denouement: "No longer young..."

Composed is beautifully crafted. Bischoff produced, recorded, mixed and mastered the album and on this evidence he excels in every role. His recording technique, as he tells it, involved recording the instrumentalists (sadly, the orchestral players are not credited on the review CD)—and every singer except Byrne and Veloso—individually in their own homes, often travelling from place to place by bicycle. He wrote the songs not, as is usual, on piano or guitar, but on the ukulele. It isn't clear if comfy slippers are integral to Bischoff's approach, but if Bischoff's choice of transportation and instrument are the secret to great music then it's time every composer invested in a bike and a uke.

Introduction; Eyes; The Secret Of The Machines; The Nest; Blossom; Your Ghost; Counting; Young And Lovely; Insomnia, Death And The Sea.