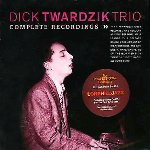 Dick Twardzik is one of the great "What Ifs in jazz. After a promising start backing the likes of saxophonists Charlie Parker and Serge Chaloff, showing a penchant for inventive originals and ingenious reworking of melodies, he succumbed to a drug overdose at the age of 24 while on tour with Chet Baker. He is one of several musicians who had yet to reach his full potential before succumbing to a drug addiction, and surely would have been recognized as one of the great pianists, if not for his untimely demise.

The first part of Complete Recordings is Twardzik's half of an album he recorded with Russ Freeman (currently available as part of a Mosaic Select set spotlighting Pacific Jazz piano recordings.) From the opener, "Albuquerque Social Swim, it's evident that Twardzik had an oddball sense of melody akin to pianist Herbie Nichols, yet working in an even more Cubist framework. The melody begins with a plodding, atonal descending pattern before a series of rapid arpeggios. It's truly a strange tune.

Twardzik was also capable of crafting catchy, standard-like pieces such as "Yellow Tango, which displays the pianist's craftsmanship and knack for popular tunes. He also reworked melodies in an original fashion, like "Get Happy and "Bess You Is My Woman, which features a novel rhythmic displacement and a keen sense of harmony. As Twardzik's only official studio work, it will leave you longing for more.

Sadly, the most that you'll get following the recordings with Freeman is a series of practice tapes of Twardzik warming up for a studio session that never materialized. Recorded at a friend's house, the quality is marginal, with watery sound, and a piano that could use a little tuning. It's clear that Twardzik is working through ideas that aren't fully conceptualized. While some songs are incomplete, they're no less interesting renderings. For a Bud Powell devotee, Twardzik was willing to go farther out into the stratosphere than most, yet displayed a genius's gift for constructing a solo. Listen to his spastic rendition of "'Round About Midnight.

While these recordings aren't up to the high standard set by the first half, they are nonetheless prime examples of a burgeoning genius at work honing his craft. Twardzik has not received the posthumous accolades of other short-lived musicians, but he is generally acknowledged as someone who was on the path of greatness, had his vices not taken their toll. His music deserves to be listened to, studied, and played. This compilation is a fine representation of a relatively small body of work, much of which is scarce.

Albuquerque Social Swim; Bess, You Is My Woman; Yellow Tango; 'Round About Midnight; I'll Remember April; A Crutch For the Crab; Just One Of Those Things; Warming Up; Nice Work If You Can Get It; 'Round About Midnight; Get Happy; It Could Happen To You; A;; The Things You Are; Yesterdays; Original; Our Love Is Here To Stay; I Get A Kick Out Of You; Bess, You Is My Woman; I'll Remember April.