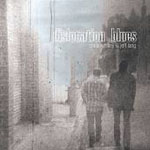 Whitley and Lang achieve this transmogrification with a mix of originals, traditional songs and, not surprisingly, two songs of Bob Dylan's. "When I Paint My Masterpiece is a jaunty romp that nevertheless betrays a certain nagging uncertainty through its mix of electric and acoustic guitars combined with the halting gait in the rhythm. "Changing of the Guard finds Whitley and Lang trading verses of the Bard's apocalyptic vision, the fluidity of their tradeoffs making it all the more regrettable the world will never get to see the two perform together live (though the two did do some selected dates together in 2004, early in their collaboration).

Thankfully Dislocation Blues fully documents their chemistry as they interact with the deferential rhythm section of bassist Grant Cummerford and drummer Ashley Davies. Whitley and Lang, who produced the album and ensured its release in the United States, refuse to prettify their music but therein lies the very foundation of its beauty. The pair conjures an air of menace through the deliberate pace they apply to the traditional tune "Stagger Lee, Whitley's falsetto vocal and the electric slide guitar winding around the changes like a shadow of a stalker. The title song is a mesmerizing travel through time, revealing Whitley's beat poet roots as means of commentary on our post-9/11 world.

Lang plays the role of younger brother to Whitley here, a figure with less experience and thus more unabashed hope. His voice is less parched and his guitar playing brighter on "The Road Leads Down and "Ravenswood. Twelve Thousand Miles is an original blues by Lang, where he demonstrates how he exorcises his personal demons as much by playing as composing. Whitley's previously recorded "Rocket House is shorn of its previously-recorded production accouterments and enlivened as an acoustic dreamscape that's no less evocative.

What might seem an odd choice here is the inclusion of Prince's "Forever in My Life. Yet Whitley and Lang take this somewhat overstated expression of devotion and turn it into an ode to primal desire. Like the almost hidden track "Hellhound on My Trail, performed by Whitley alone, it becomes a personal statement that haunts long after the performance is over.

The same can be said about Dislocation Blues in its entirety.

Visit Chris Whitley and Jeff Lang on the web.

Stagger Lee; Twelve Thousand Miles; When I Paint My Masterpiece; Rocket House; The Road Leads Down; Dislocation Blues; Forever in My Life; Velocity Girl; Ravenswood; Underground; Changing of the Guard; Motion Bride; Hellhound on My Trail.