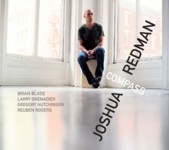 Like its predecessor Back East (Nonesuch, 2007), saxophonist Joshua Redman's Compass invites comparisons with Sonny Rollins' totemic acoustic trio outing Way Out West (Riverside, 1957), whose instrumentation it reflects and whose influence Redman has acknowledged.

Another Rollins album which springs to mind, though more for its title than its structure, is Saxophone Colossus (Riverside, 1956); for with Compass, Redman, like Rollins 53 years earlier, has produced the most singular album of his career so far. Redman's previous acoustic albums have been uniformly strong, but have lacked a certain something—an in the moment, devil-may-care spontaneity—which would have lifted them beyond competence towards greatness. On Compass, however, the saxophonist has cast caution and concern with form aside: a loose-limbed, wayfaring vibe permeates the music, to its great advantage.

Gathering around him four longtime colleagues—bassists Larry Grenadier and Reuben Rogers and drummers Brian Blade and Gregory Hutchinson—Redman went into the studio with few preconceptions other than to dig deeper into the piano-less trio format and, as he writes in the liner notes, to "let go." Somewhere along the line he had the idea of using multiple bassists and drummers. Five of the 13 tracks on Compass feature two bassists and two drummers, while another pair include two bassists and one drummer. The remaining six tracks feature the four accompanists in various trio permutations with Redman.

On the quintet tracks, Redman has avoided using the doubled-up rhythm section simply for increased volume and impact. Instead he has fostered a call and response dialogue between the musicians, who—with the exception of Redman himself, magnificently on-mic practically from start to finish—take turns to lay out and listen as frequently as they step forward to be heard. While there are passages on "Identity Thief" and "Just Like You" when the band hits the listener with the force of a twin-engined express train, there are others, notably on "Little Ditty" and "Moonlight," a reading of Beethoven's "Moonlight Sonata," which, despite the massed firepower, are pretty and delicate, sometimes even dainty.

With the exception of "Moonlight" all the tunes are group originals, most of them written by Redman. Sometimes, as on the boppish "Hutchhiker's Guide" and "Round Reuben," the Pat Metheny-esque "Faraway," or the Eastern-undertoned, soprano vignette "Ghost," Redman's tunes are conventionally conceived. Almost as frequently, they resemble exercises or motifs, skeletal and reiterative, but with each nonetheless possessing a recognisable emotional character—the restless "Insomnomaniac" and manic "Un Peu Fou" are as their titles suggest.