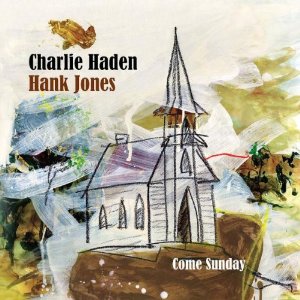 Come Sunday continues the dialog between two jazz masters—bassist Charlie Haden and pianist Hank Jones—that began with 1995's Steal Away (Verve). The topic of discussion concerns hymns, spirituals, and beloved tunes which are, without a doubt, personal and familiar to both musicians. Jones (the elder sibling of jazz luminaries Elvin Jones and Thad Jones) was the son of a devout Baptist deacon while Haden grew up performing in his family's radio show, which included country and American folk music.

Though conversational in tone, the date's significance is understated—more than just two renowned musicians playing together. Recorded shortly before his death in 2010, it is one of Jones' final recordings, and serves as a reminder of his lyrical touch, accompanied here by Haden's empathy and resonance.

Any indications of Jones health were nonexistent. At 91, his melodicism and technical abilities continue to astound, whether swinging gracefully on "Down by the Riverside" or gently on "Bringing In The Sheaves," as Haden's workmanship guides with unassuming assurance. The two seemed to be enjoying themselves immensely, keeping the tunes pretty much intact but also illuminating their inner qualities, as the swanky cadence of "Give Me That Old Time Religion" silently echoes the song's sentiment, "It's good enough for me."

There are moments, such as the duo's powerful exchange in "Were You There When They Crucified My Lord?" and the serenity in "Nearer My God To Thee," that speak of the musicians' delicate and self-effacing approach. At first, the two seasonal songs—"God Rest Ye Merry, Gentlemen" and "It Came Upon A Midnight Clear"—seem totally out of place, but ultimately fit perfectly within the context of this time-weathered set.

While the covers are taken primarily from sacred compositions, the tunes transcend both religious and secular boundaries and can be appreciated on many levels. From the duo's unobtrusive interpretations to the way in which the Jones and Haden communicate, the melodies contain a quiet magic whose crowning jewel is found in the beloved title track, written by the great Duke Ellington. It is an apropos sentiment to this moving release.

Take My Hand, Precious Lord; God Rest Ye Merry Gentleman; Down By The Riverside; Going Home; Blessed Assurance; It Came Upon A Midnight Clear; Bringing In The Sheaves; Deep River; Give Me That Old Time Religion; Sweet Hour of Prayer; The Old Rugged Cross; Were You There When They Crucified My Lord?; Nearer My God to Thee; Come Sunday.