Come In and Hear the Truth: Jazz and Race on 52nd Street

By Tom Greenland
November 28, 2008
Sign in to view read count 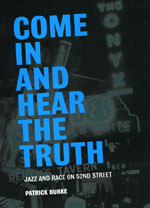 The section of Manhattan's 52nd Street between 5th and 7th Avenues, fondly referred to as "The Street," holds iconic status as a major epicenter of jazz from Prohibition through World War II. Partrick Burke's book is a critical reexamination of 52nd Street's history with particular focus on racial relations, the social ethos of "bachelor" culture, the development and popularity of jazz genres and the aesthetic tension between jazz viewed as a "high" art form of spontaneous individual expression versus jazz as standardized popular (read: "low") entertainment.

Burke is especially interested in how the various stylistic representations of jazz—dixieland, swing and bop—influence and are influenced by racial stereotyping and in how black entertainers adopted individual, even contrary, strategies to undermine such perceptions. He suggests, for example, that violinist Stuff Smith combined improvisational prowess with showman's shtick in his early performances at the Onyx Club, while his successor, singer Maxine Sullivan, relied on John Kirby's classicized arrangements, European repertory and a gracious, cultivated stage demeanor.

Thoroughly researched using archives, newspapers, trade magazines, interviews, supplemented with period photos and a timeline of key clubs, the book is laid out in a series of case studies: the origins of the Onyx club (once a speakeasy and insider hangout for white "legit" musicians); the Spirits of Rhythm at the Onyx; singers and trumpeters Louis Prima and Wingy Manone (white musicians who appropriated and popularized black music) at the Famous Door; Smith then Sullivan at the Onyx; Count Basie at the Famous Door; clarinetist Joe Marsala at the Hickory House; the rise of bebop and the Dixieland Revival at Jimmy Ryan's.

More than a historical retread, Burke's treatment of the aforementioned themes makes for stimulating and informative reading.