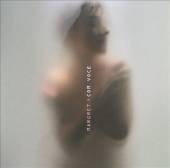 The blushing, demure voice of Margret Grebowicz is a thing of rare and extraordinary beauty. Everything about her is so perfect that she seems to exist in singular splendor. She is pitch-perfect, no matter how nuanced the note she sings is. Usually she can make this up with a tone so freshly subtle and unusual that she seems to have been created it on her own. She can make notes undulate at her command. Her intonation is soft and sung with utter nakedness, bereft of ceremony and circumstance so much so that the sheer emotion of each word she sings is enough to take the breath away. In this respect she is much like the Brazilian performer Rosa Passos or the magnificent Colombian singer Lucia Pulido. But then again, she has no precedence. Margret (who primarily goes by only her first name) exists in a soft nasal world almost alone where the very air abounds with the softness of music.

On Com Você her voice shimmers through nine songs, expertly negotiated on the wave of a band that also reads her vocals with expert facility. But with miraculous empathy from guitarist Ben Monder and the ghostly percussive shadow of Luisito Quintero on some tracks, the musical world of this album revolves around Margret. Her voice glides, skips and dallies endlessly like air on glass. She infuses the lyric of each song with life, breathing into each word with sometimes short, shallow gasps and at other times with deep, interminably expanding lungs full of air that expel emotions like a myriad dandelions rising and falling on undulating thermals. Margret also picks the most precise note for the lyric, expanding, bending or clipping it short when the most nuanced part of the emotion demands it. As a result, she lands on its soft spot, extracting the most unusual feelings in response, from musicians and audience.

Com Você may be short on overall time, but it is a wonderful vehicle for Margret, with songs arranged by Gil Goldstein— such as Rufus Wainwright's "Peach Trees"— and Matt Pierson, who extracts an enviable chemistry between Ben Monder and the singer on Chris Issak's "Wicked Game." But perhaps the most memorable songs on the album could be Caetano Veloso's "Saudosismo," "O Trem Azul," from the pen of Lô Borges, and "By on Bye Tu (Farmer's Trust)" and "Half the Way (If I Could)," two tracks from Pat Metheny. There is really no chart here that falls short of wonderful. However, Margret's reading of the Brazilian music deserves special mention as she is not Brazilian and yet infuses the songs with emotion that only Brazilian singers with duende and a deeper sense of saudade can.

This could easily be a definitive vocal album from a singer who is blessed with just that magic that the word duende describes. Much more is sure to come from this truly gifted singer. How her fans, old and new alike, will be entranced will be a fabled experience.