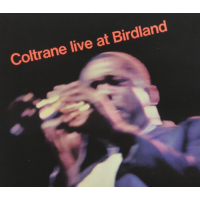 Critics have proclaimed John Coltrane as one of the most influential jazz musicians, one of the greatest innovators AND saxophonists of all time. Noted jazz critic Ira Gitler once described Coltrane's music as "sheets of sound." All very true statements from (mostly) well-respected individuals.

My personal favorite era of the John Coltrane Sound features arguably the greatest quartet of all time, pianist McCoy Tyner, drummer Elvin Jones and bassist Jimmy Garrison, the quartet formed in late 1961. Coltrane is so important to the development of jazz that I would venture to say that any music recorded by Coltrane is available in stores or on the Internet. Coltrane Live at Birdland showcases "The Great Quartet" in excellent form: Elvin banging and cursin', McCoy a steady force maintaining the form, Jimmy Garrison pacing the beat and Coltrane stretching out into space filling the void. No other quartet has so dominated the jazz scene since.

The first three compositions on this re-issue are "Live at Birdland" and the final three were studio recordings. "Afro Blue" is the shining star of this set. I wish it did not have to end as quickly. I can still feel the pulse long after the song has ended. "Your Lady" features Elvin and Coltrane providing extemporaneous embellishment on the theme to perfection. The bonus track is titled "Vilia," originally recorded at a March 6, 1963 session. The liner notes indicate that when this album first came out, "Alabama" inadvertently included take 4. For this re-issue they have included the full performance of take 4 and take 5. This is certainly a welcome addition to the ever growing list of important jazz re-issues. A definite collectors' item.