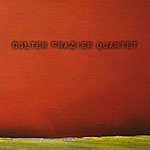 A tasteful and inventive composer, Frazier's writing tends toward the chamber-esque, with periodic interludes of turbulence and rousing rhythmic activity. He generates a kaleidoscopic array of textures and tones from his string heavy ensemble during the austere opening of "Lloyd's Prayer," which slowly builds to a coiled, throttling theme, while "Hopes of Reunification" slyly alternates restrained pointillism with hyperactive staccato interjections reminiscent of Anthony Braxton and Raymond Scott. "4 Days and 5 Months" and Miles Jay's "Flight School for Sparrow" draw on muscular modal forms and vibrant intensity, approaching Coltrane- esque levels of expressionism.

The ensemble's empathetic interpretations of Frazier's opulent tunes reveal a symbiotic rapport. Individual solo statements are effortlessly integrated into the overall fabric of each piece as communal expressions, which reach a fevered pitch on "Flight School for Sparrow," and introspective depth on "Where000."

Frazier's mastery of the tenor saxophone encompasses a vast range, from hushed overtones to coruscating multiphonics. His aesthetic inclinations are subservient to his compositional goals however; although capable of extreme dynamics, he is no mere pyrotechnician. Alternating soaring unison lines and thorny contrapuntal themes with Coventry, the pair veers from songbird like harmonies to terse sinewy lines fraught with dramatic dissonance.

Jay and Wallace eschew predictable swing in favor of inspired polyrhythms and colorful textural accents to support Frazier's multi-layered pieces. "Late Again" even hints at the driving early minimalism of Phillip Glass and Steve Reich while the modal ostinatos of "4 Days and 5 Months" and "Flight School for Sparrow" borrow harmonic elements from Middle Eastern traditions.

Arriving fully formed with a singular artistic focus, the Colter Frazier Quartet is a stunning debut, worthy of the highest praise.