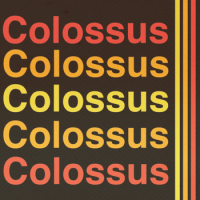 Colossus is the name of the album and the band, a seventeen- piece ensemble formed in 2012, comprised of present and former students at the Eastman School of Music in Rochester, NY, and co-led by trumpeter Dave Chisholm, trombonist Mike Conrad and saxophonist Levi Saelua. While the music is decidedly contemporary, its essential components—melody, harmony, rhythm, improvisation—are the same as those that have defined jazz from its inception. In other words, it is modern with almost none of the sometimes unpleasant side effects. Read that as you may.

The album opens with Conrad's "West Point," an agreeable mid-tempo salute to the Army that earned first prize at the Jazz Knights Composers Forum in 2012. After an engaging introduction by brass, reeds and rhythm, the theme lopes easily along behind earnest solos by tenor saxophonist Marc Abrate and guitarist Gabe Condon, leading to a definitive last chord by pianist Jacob Dupre. Conrad also wrote "Mild, Mild Midwest," a smooth-flowing theme commissioned and premiered by the NY Youth Symphony in 2012 on which he shares blowing space with tenor Erik Stabnau and drummer Jeff Krol.

For his part, Chisholm wrote the seductive "Science Adventure," wherein his agile trumpet shines with trombonist Alistair Duncan, and arranged the dirge-like hymn "Come Thou Fount of Every Blessing" (showcasing Saelua's soprano sax), which rings down the curtain. Saelua arranged the other numbers, Clay Jenkins' murky "Up and Up" and Joe Kozlowski's urbane "Little Vikings," the first featuring trumpeter Reid Poole and alto Alexa Tarantino, the second, pianist Dupre and trumpeter Kozlowski. Brass and reeds are exemplary throughout, the rhythm section efficient, the soloists by and large congenial.

If there's a downside it lies in choice of tempo, as every number ambles along at basically the same measured pace. There are no ballads, nor are there any flag-wavers (even "West Point," which by all rights should be entitled to wave a flag). Aside from that (and some atypical dissonance on "Fount"), the package is enticing and neatly wrapped. Colossus is an album—and a band—worth hearing more than once to appreciate its expansive framework and texture.

West Point; Science Adventure; Up and Up; Little Vikings; Mild, Mild Midwest; Come Thou Fount of Every Blessing.