By Dan McClenaghan
February 9, 2019
Sign in to view read count 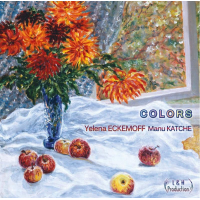 Pianist Yelena Eckemoff brings the top drummers into her recording sessions, whether it's Billy Hart on Lions (2014), or Peter Erskine on Glass Song (2012) and Desert (2015), or Jon Christensen for Everblue (2014)—all of these on her own L & H Production label.

The year 2019 finds the prolific Eckemoff presenting her first duo album, Colors, a piano and drums affair with another topline partner sitting at the kit: Manu Katche, a distinctive drumming stylist and a leader in his own right, with eight releases to his name, five of them on ECM Records.

Colors could just as well been called Life, a panoramic set of Eckemoff originals that affixes different colors to life's stages, from "White," an examination of birth's blank slate, to "Orange," a celebration of youthful energy, through "Violet," a nod to the thrill of first love, to "Black," a facing, with equanimity, of death's mysterious void.

Eckemoff's music is often complex and cerebral, drawing on her classical studies in her native Russia, and it frequently leans toward the reflective and inward. This is especially true of her early recordings, like Cold Sun (L & H, 2010) and the previously mentioned Glass Song. But with the release of Lions her sound seemed to draw as much from the heart and gut as it did from the head; the energy of life seemed to swim in tandem beside the reveries of the mind. Colors presents that mix to perfection.

Eckemoff's piano sound is, as always, crisp and clean of touch, intricate and nuanced and complex. It can sound a bit playful, full of wordless wonder ("White"); and it can portray an expanding consciousness with an inward tilt ("Pink"), and it can ROCK OUT, big time, with Eckemoff and Katche digging-deep into a relentless groove on "Orange." Is it Eckemoff prodding and exhorting Katche, or is it Katche elbowing Eckemoff; or is it a balanced pairing, a two way call and response bubbling with the electricity of life? Probably the last choice, given a listen to "Indigo," another animated, jazz-rock, groove-centric sound.

Not that moments of reflections aren't present. "Violet," concerning "the thrill of first love" is a reflective interlude of subtle beauty; and "Blue" begins as a lyrical, inward rumination that shifts, two minutes in, into a playful prance that swells to a tempest that then tapers down to tranquility, rolling then to a re-start of the cycle. And "Red" seems to dance with the vibrancy and sassiness and confidence of an attractive woman in her prime (imagery taken from Eckemoff's accompanying poem in the cover booklet).

Colors covers a wide range of moods and styles, a mode of operation that can reveal weaknesses in a thematic cohesion. That Eckemoff and Kache avoid this potential hazard over a fourteen song, near-eighty minute set is remarkable.

One of Yelena Eckemoff's finest recordings.