BY JOHN KELMAN
October 2, 2007
Sign in to view read count 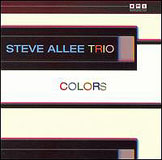 Steve Allee's biggest claim to fame is his collaborative big band album with reedman Chuck Carter and drummer John Von Ohlen, Downtown Blues (Sea Breeze, 1999), which garnered a Grammy Award nomination. Still, while he's far from a household name, the west coast-based pianist has been working in the trenches, scoring for film and television, and working with artists ranging from James Moody and Slide Hampton to Randy Brecker and Tim Hagans. Colors is his third release as a leader and the first to feature an all acoustic piano trio. It's an energetic and diverse set of largely original material, with a couple of standards thrown in for good measure.

Allee and his trio—bassist Bill Moring and drummer Tim Horner—sit comfortably in the mainstream, although the pianist demonstrates a slightly left-of-center harmonic approach that, at times, resembles New York-based pianist Marc Copland, only more direct and less abstractly impressionistic. "Bubbles is a good example of how Allee utilizes slightly skewed harmonies but with a more definitive lyricism and a straightforward sense of swing. He's an economical but inventive soloist who, rather than being strictly supported by Moring and Horner, works in a three-way conversation with them throughout the record, and it's the trio's communal interplay that creates some of Colors' most magical moments.

"Fishes is another Allee composition that's skewed just a tad from the mainstream. As unequivocally contemporary as this trio is harmonically and interactively, there's an exuberant forward motion that keeps things accessible throughout. Moring's bass solo is vibrant, and the trade-off between Allee and Moring towards the end of the tune is a wonderful mix of energy and restraint. "Changes, on the other hand, is a dark ballad, with Allee's delicate touch supported by equal elegance from Moring and Horner, even as it gradually builds dynamically to an unexpected climax before returning to the sparer head.

It's the trio's ability to shape the material with a focused sense of clarity and development that elevates Allee's already appealing writing to even greater allure. Even when the trio stretches out, as it does on the nearly nine-minute " Lucaya, there's never a sense of excess or self-indulgence. And while there's no mistaking the two standards—Kern/Harbach's "Yesterdays and a curiously stop-start but still swinging take on the Mercer/Arlen classic, "Come Rain or Come Shine —there's enough personality here to keep them fresh and relevant.

Music performed this selflessly runs the risk of being overlooked, but that would be a mistake. Mainstream it may be, but Colors is a thoroughly engaging record that's grounded enough to appeal to traditionalists while, if not exactly cutting edge, possessing enough modernity to resonate with those looking for more than mere retreads of past conventions.