BY BUDD KOPMAN
October 2, 2007
Sign in to view read count 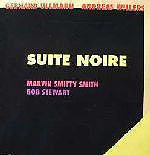 Suite Noire is essentially the last recording of what could be called "early Ullmann," which however, contains some of the seeds that will flower later. Once again partnering with Andreas Willers, multi-reedman Gebhard Ullmann has created an atmospheric and, for the most part, dark work that will surely intrigue.

One of the seeds is the first track, "Tapping The Foot, Tapping The Brain," which opens with both melody and accompaniment overdubbed, producing many parts, by Ullmann on different instruments. The line is not a simple one, having much rhythmic complexity, and the precision shown by Ullmann is nothing short of astounding, while Willers adds some sounds and unison playing.

The main mood is set up by the longest single track, "Lonely Woman/Double Density," both by Ornette Coleman, as low, open guitar chords sound against very energetic and tense drumming from Marvin "Smitty Smith, leading to the mournful theme played and elaborated on by Ullmann. Willers answers with a dissonant and high energy solo that matches the ongoing drumming from Smith. Ullmann picks up a phrase from Willers as the pieces rises in tension, building to a crest. Smith, reaching a crescendo, finally subsides and this amazing track drifts away.

"Autumn Monday" is a duet with no overdubs between the bass clarinet of Ullmann, who has control of its entire range, and Willers, who uses various techniques where the lines they play continually change roles.

The twelve-minute title tune is actually a suite of six parts that can be discerned by their varying style, rather than physical separation. "Low - liness" is pure Ullmann overdubbed, playing dense, low harmonically ambiguous chords which leads to "Ein Denkmal für Rosa und Karl" and Ullmann's soaring soprano saxophone lines and bird calls against overdubbed Willers. "Sudan Airways Loop" brings the first appearance of tuba player Bob Stewart, leading to Willers in "Solo," which has a quote that flashes by. The suite ends with "Twelve Tone Stomp," that gets quite chaotic within a regular rhythm.

"Blaues Lied," a tune that will appear, drastically reworked, four more times on subsequent albums, gets its first treatment here. This "blue song" is quite sparsely played by Ullmann and Willers in unison at first, but then both players are heard again via overdubs. Actually bordering on the humorous, the blueness of the tune is kept quite hidden in this rendering.

The record ends with "L'Aura," evoking a jungle setting settling down for the night, through sound painting. Whether this track is related to "Laura" on Ullmann - Rava - Willers - Lillich - Schauble (Nabel, 1989) is unclear due to the lack a distinct melody, although the emotional range and basic approach is the same.

As Suite Noire is listened to repeatedly, its impact only increases.