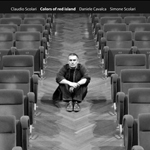 Colors Of Red Island is a percussion-driven album—unsurprisingly, given that Claudio Scolari and his collaborator Daniele Cavalca are both drummers and percussionists of some considerable talent. Scolari and Cavalca are also talented composers, with a sophisticated ability to blend acoustic and electronic sounds in ways that emphasize the beauty of each and never risk the album becoming percussion-heavy. The result is a recording that contains funky, danceable rhythms, reflective soundscapes, and driving, up-tempo grooves.

Scolari is an experienced musician and educator, based in Italy, who plays in classical, contemporary and jazz ensembles. Cavalca is still in his early 20s and earned a scholarship to study at Berklee in 2010. This is very clearly Scolari's album—he's also the producer and composer—but Cavalca makes a major musical contribution as well as co-writing six tunes. Credit must also go to the 18 year old Simone Scolari, Claudio's son, whose trumpet playing is a central part of some of the loveliest music here.

In fact Simone's trumpet makes an early entrance, in the first few seconds of the beautiful "Colors of Red Island." He echoes Scolari's simple and delicate piano melody before moving on to new lyrical phrases of his own with a style that is reminiscent of Tomasz Stanko. On "Earth Dances Esplosions" his long note playing casts a calming influence over the hard-driving drums and insistent vibes of Scolari and Cavalca, while on "Variation of Movement" his playing becomes harder and more urgent as it matches the pace of the percussion.

"Cold Landscape" has a distinct chill-out feel, with Cavalca playing an uplifting vibraphone part over Scolari's drums and synthesiser. By contrast "Improvised Sentimental Song" is not the slow ballad that the title suggests—it's a funky tune featuring some inventive drumming and a repetitive but effective phrase on vibes. "Emotion Appearance" and "Dialogues Night" are both percussion showcases. The former is inventive and nuanced but "Dialogues Night" is over long and lacks structure.

At almost 80 minutes in length Colors Of Red Island would benefit from a few careful edits—a tighter and more focused album would result—and at times the synthesisers lack the warmth that the acoustic instruments achieve with such ease. But these are minor criticisms of an impressive and engaging album with moments of great beauty and, in Cavalca and Simone Scolari, two young players of real potential.