By MARK CORROTO
December 2, 2008
Sign in to view read count 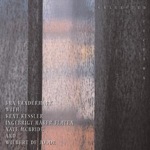 The beauty and the challenge of undertaking a project like Collected Fiction, a collection of bass and reed improvised duos, is to make an engaging and thoughtful experience for both players and listeners. These 22-tracks do just that with a polymorphic approach that renews itself with each track.

The organizer here is Chicagoan Ken Vandermark, playing with three very familiar bassists and one somewhat new acquaintant. Vandermark's connection with Kent Kessler goes way back to their work with Hal Russell's NRG ensemble in the late 1980s. Like Kessler, Nate McBride is a fellow Chicagoan and has kept time for Vandermark in numerous groups. Similarly, Norwegian Ingebrigt Haker Flaten has intertwined his career with the saxophonist, playing in the bands Schooldays and Free Fall. He released his solo disc Double Bass on Sofa Records in 2003. The newest collaborator is the Dutch bassist Wilbert De Joode. Until the release of Ab Baars Trio with Ken Vandermark, Goofy June Bug (Wig Records, 2008), there is no record of the two recording together.

Recorded in Chicago in February 2008 by Bob Weston, the sound has a live quality that reveals the emotion and physicality of the playing, while giving you that "I was there" feeling as a listener. The bassists all play acoustic behind Vandermark's various reeds. I count tenor and soprano saxophone, plus clarinet and bass clarinet.

As a soloist, Vandermark has stepped out from his composing and organizing work of late, releasing a solo disc, Furniture Music, in 2003 and a series of duo sessions with drummers Paal Nilssen-Love and Tim Daisy. Perhaps his friend Mats Gustafsson is the perfect confederate for a drummer with his muscular attack and volume. Vandermark seems to have found a home here.

These improvised pieces were created (as noted) with multiple takes and the music (upon repeat listenings) feels as if it is more constructed than free. McBride plays an (almost) blues behind the tenor on "Torus II," and drops wave upon wave of energy in front of a bass clarinet on "Ellipse II." Kessler might be Vandermark's closest companion here, plucking and bowing with the utmost sympathy. They even take on a bit of Brotzmann's sound on the noisy "Spiral," with its barking aggressive energy. But mostly this music is focused inward. "Contour II," with its arco bowed lines and popping clarinet, find the chamber setting more to its liking.

The most physical of the bassists has to be Flaten. There is no mistaking his vocalizing on "Curve I" or the menace he is to his instrument on "Extension." His playing, more in the tradition of the great European improvisers Joelle Leandre and Peter Kowald, expands the sound of the bass beyond the traditional pulse. Same can be said for Joode as he scatters notes on the opening section of "Ellipse IV," sounding as if he were a train's wheels rolling past a crossing. Together Vandermark and he create almost electronic sounds on "Contour III" before parting into a call-and-response improvisation.