By BRUCE LINDSAY
January 28, 2012
Sign in to view read count 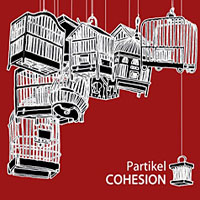 The saxophone/bass/drums trio may not be the most unusual musical amalgamation but it gives plenty of scope for inventive, dynamic, exchanges between the assembled musicians. Partikel—a young London-based and sax-led trio—makes the most of such opportunities on its second album, Cohesion.

Partikel is led by composer Duncan Eagles, who excels on both tenor and soprano saxophones. The band released its debut, (Partikel (F-IRE Presents), in 2010 and although its profile has been relatively low-key since then, the trio has garnered praise from critics and crowds in the UK. Eagles takes on most of the writing, although his brother Sam wrote the short "Intro" and "Outro." Bassist Max Luthert contributed the up-tempo, Eastern-influenced "Assam" and drummer Eric Ford arranged Eagles' bouncy, percussive "El Schmeckl."

While many of the UK's newer ensembles seem to be at their happiest when exploring interesting harmonic relationships or complex rhythms Partikel keeps the accent much more firmly on melody. This is not to imply that the band is rhythmically or harmonically uninteresting—far from it—but this emphasis on melody gives it an immediacy and potential commercial appeal that other ensembles are missing.

Eagles' saxophone is at the center of this melodic approach, but Ford always provides a varied and reliable foundation. Luthert can also deliver some fluid and melodic lines. The prosaically titled "Bass Solo" gives Luthert ample space to demonstrate his skill, weaving patterns that combine inventive lead playing with a tough and punchy rhythm. That tune slips smoothly into "Market Place," a longer piece characterized by Eagles' lyrical soprano, which is reminiscent of the sound of another English saxophonist, Andy Sheppard. Eagles' tenor sound has a rawer edge than his soprano, which works beautifully alongside Luther's chunky bass on "Follow Diversion."

Cohesion is the work of a talented trio. Partikel is an emerging force on the UK scene, still on its way to achieving full potential but already a strong ensemble with a powerful set of tunes.