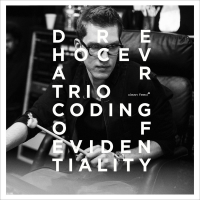 Slovenian-born, New York based drummer Dré A. Hočevar may not be a familiar name to many but that will likely change after Coding Of Evidentiality. Hocevar has convened a trio which sits comfortably in the lineage of the Portuguese RED Trio (who can be heard to good effect on Empire (No Business, 2011, Stem (Clean Feed, 2012) and Rebento (No Business, 2013)) and going further back, English pianist Howard Riley's seminal early 1970s outfit with bassist Barry Guy. Indeed Hocevar boasts a style related to both Gabriel Ferrandini of the former and Tony Oxley from the latter. Although all but one of the pieces are credited to the leader, there is a democratic ethos at work in how they are collectively realized and the compositional frameworks are so slight as to be indistinguishable from the assured improvisation.

In a departure from the mold, Hocevar brings in the cello of Lester St.Louis to replace the more usual bass, while Belgian Bram De Looze occupies the piano stool. The addition of St. Louis proves a master stroke as the young American combines energy and invention into a madcap brew which sits well alongside the pianist's dark rhythms in the bass register and exploratory right hand runs. De Looze's occasional thunderclaps recall Matthew Shipp while Cecil Taylor also comes to mind in his rolling evenly articulated flow on "Polymorphia" and "Second Portrait Of The Exemplary....." On drums the leader steers unobtrusively yet decisively, as he melds a stream of unconventional textures into a percussive flow, generating either pulsing momentum or timbral ambiguity as the moment demands.

Sam Pluta adds electronics to supplement the already potent mix on "Critical Discourse Analysis (CDA)." In truth while they increase the range of textures, they don't prove central to the conversational flow which, following an introduction full of indeterminate sounds, transmutes into an extended cryptic ballad, before culminating in a dense crescendo of scurrying lines. Other tracks like the opening "Form of the Future Thought" and the stop start "Representational Redescription" follow a similar trajectory, from spare transparent beginnings to opaque climax. St. Louis revels in an unaccompanied outing on "Cello Interlude No. 1" blending fractious pizzicato outbursts with rich arco abrasion.

But what distinguishes this gripping debut overall is the unpredictable nature of the journey as much as the resolution of the final destination.