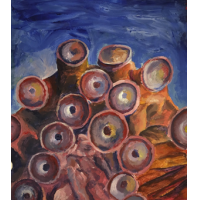 The contemplative and captivating Coalesce is guitarist Jessica Ackerley's debut release. On it Ackerley, with her trio, interprets seven of her engaging originals with intelligence and passion. The intimate atmosphere is well suited for both the collective musical expressions and individual melodic embellishments. This results in a cohesive album that thrills and intrigues.

Ackerley mixes elements from various styles in her compositions demonstrating a cross genre fluidity. Her haunting "Solo Guitar" evokes the western classical repertoire of modernist composers. It is rhythmically complex with resonant tones that build an introspective monologue with a dash of atonality. Her "Clockwork," meanwhile, has the energy and mood of progressive rock tunes. Ackerley takes center stage with crisp, nimble phrases that meander pensively around the main theme. Muntz, too, showcases his instrumental skills with a lyrical improvisation that Ackerley's thick guitar chords and Fraser's brushes support.

The band members not only demonstrate thrilling synergy with one another but also deftly utilize silent pauses to a memorable effect. The somber "'merica" has a Zen ambience with Ackerley's isolated chimes echoing in the enveloping lull. Fraser enhances this solemnity with his occasional percussive bursts. Muntz's moaning con-arco lines framed against Fraser's percolating kit and Ackerley's mournful sparse notes give the piece a deep, poetic sense. A carefully orchestrated dissonant, and emotive melee ensues that is simultaneously raw and stimulating, stylish and graceful.

With the delightful Coalesce, Jessica Ackerley asserts her artistic identity. Her work demonstrates her independence and refusal to conform, yet it is rooted firmly in that which has influenced her. If she maintains this course Ackerley has a brilliant career ahead of her.