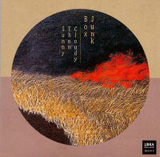 Along with Trace a River (Libra, 2008), this is the second concurrent release by the prolific Japanese pianist Satoko Fujii in honor of her fiftieth birthday. Cloudy Then Sunny is the sophomore follow-up to Fragment (Libra, 2006), the debut recording of Junk Box, a collective trio that features Fujii's most probing explorations alongside the highly expressive trumpet playing of her husband, Natsuki Tamura, and the ever resourceful percussionist John Hollenbeck.

Fujii and Tamura have honed their tight-knit rapport over many years. Their conservatory education notwithstanding, their stylistic diversity and technical virtuosity, like Hollenbeck's, seems limitless. Together, they make an empathetic and mercurial trio.

Relaxing her control as principle composer, Fujii eschews traditional notation for this project, providing graphic scores and text to guide the trio through what she terms "com-impro" (composed improvisation). Reaching beyond mere notes into pure texture and mood, the three musicians interpret similar concepts from different perspectives, lending a cohesive sensibility to their free explorations, culminating in rich collective storytelling.

A writer of tuneful melodies, Fujii improvises pungent arpeggios and cyclic chord patterns, providing a rhythmic and harmonic underpinning for the trio. She embraces the tonal possibilities of playing inside her instrument, much like Tamura, who expands his range through extended techniques and subtle electronic effects that give his horn an unearthly tonality. An unfettered stylist in the mold of Lester Bowie and Bill Dixon, Tamura's opening screed on "Opera by Rats" is frightfully acerbic, while his intro to "Chilly Wind" showcases a whispery tone over Fujii's icy, scrawled accents.

Hollenbeck utilizes a wide array of devices, ranging far beyond the color palette of a typical trap set. His nuanced accents on "Multiple Personalities" contrast with the brash flurries of kinetic pummeling that conclude "Alligators Running in the Sewers."

Fujii and Tamura interlock in furious contrapuntal discourse on "Back and Forth," while Tamura elicits paint-peeling cries on "Chinese Kitchen," accompanied by Fujii's thundering chords and Hollenbeck's percussive tempest of skittering xylophone sweeps and ratcheting, machine-gun bursts of noise. A conceptual tone poem, "Soldier's Depression" is a mosaic of militaristic press rolls, pensive piano filigrees and ghostly, howling trumpet lines that gradually morph into plangent cries and whispers.

Cloudy Then Sunny incorporates a variety of textures, ranging from caustic to ethereal, with the title track segueing between both. Junk Box is one of Fujii's most sonically intriguing ensembles—dark, but not oppressive. Their efforts are worthy of investigation by those with open ears.

Computer Virus; Chilly Wind; Back and Forth; Night Came in Manhattan; Chinese Kitchen; Multiple Personalities; Opera by Rats; Alligators Running in the Sewers; Soldier's Depression; One Equation; Cloudy Then Sunny.