BY HRAYR ATTARIAN
January 9, 2017
Sign in to view read count 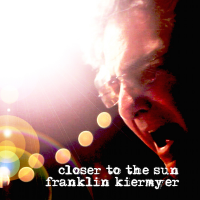 Most of drummer Franklyn Kiermyer's records have a strong spiritual aura but none as intensely so as the deeply introspective Closer to the Sun. For this sublime session Kiermyer draws inspiration from saxophonist John Coltrane's Impulse years. This is not, however, a mere tribute through reinterpretation of the great artist's work as Kiermyer has a unique style that is deferential to but never derivative of those who have influenced him.

Kiermyer often utilizes repeating motifs and melodic fragments to built hypnotic pieces that are intricate yet allow for plenty of individual spontaneity. The expansive "Emancipation proclamation" is made up of haunting vamps of percolating rhythms and tenor saxophonist Lawrence Clark's vibrant, sharp phrases laced with fury. Pianist Davis Whitfield emerges from this mesmerizing, chant like, backdrop with a delightfully angular performance. Slowly the band's refrains usher in a bluesy ambience that shatters into a dissonant riotous ensemble play that concludes the tune on a thrilling note.

The band members have seamless camaraderie resulting in moments of exquisitely fluid collective sound. On the intense and exhilarating "Mixed Blood" the quartet engages in a fiery abstract conversation that remains remarkably cohesive despite four independent and expressive overlapping monlogues. Kiermyer's kit thunders and roars and together with Whitfield's rolling keys and bassist Otto Gardner's agile lines they build a stimulating harmonic framework. Over this stirring backdrop Clarke's vibrato filled tenor wails with passion.

There are also moments of contemplative lyricism like on the tender "Song for My Daughters." Clarke's full bodied and warm tones hover over the main theme. Kiermyer's drums rumble and his cymbals softly rustle as Whitfiled's thick chords resonate and Gardner's strings reverberate in a lithe dance. The result is subtle and exquisite poetry with hints of melancholy and reserved sentiment.

Closer to the Sun is a high point in Kiermyer's uniformly superb output. On it the intrepid drummer masterfully balances individuality with group dynamics, improvisation within complex compositions and soul cleansing emotion with provocative intellectual originality. Because of all these layers Closer to the Sun is an album that can be savored repeatedly